How do we determine whether RPC, Inc. (NYSE:RES) makes for a good investment at the moment? We analyze the sentiment of a select group of the very best investors in the world, who spend immense amounts of time and resources studying companies. They may not always be right (no one is), but data shows that their consensus long positions have historically outperformed the market when we adjust for known risk factors.

RPC, Inc. (NYSE:RES) was in 15 hedge funds’ portfolios at the end of September. RES shareholders have witnessed a decrease in enthusiasm from smart money in recent months. There were 19 hedge funds in our database with RES positions at the end of the previous quarter. Our calculations also showed that res isn’t among the 30 most popular stocks among hedge funds.

If you’d ask most shareholders, hedge funds are seen as worthless, old financial vehicles of years past. While there are over 8,000 funds in operation at the moment, Our experts hone in on the masters of this club, around 700 funds. These hedge fund managers command most of all hedge funds’ total asset base, and by shadowing their inimitable equity investments, Insider Monkey has spotted several investment strategies that have historically beaten the S&P 500 index. Insider Monkey’s flagship hedge fund strategy exceeded the S&P 500 index by 6 percentage points per annum since its inception in May 2014 through early November 2018. We were able to generate large returns even by identifying short candidates. Our portfolio of short stocks lost 24% since February 2017 (through December 3rd) even though the market was up nearly 23% during the same period. We just shared a list of 11 short targets in our latest quarterly update.

We’re going to take a gander at the new hedge fund action regarding RPC, Inc. (NYSE:RES).

How have hedgies been trading RPC, Inc. (NYSE:RES)? 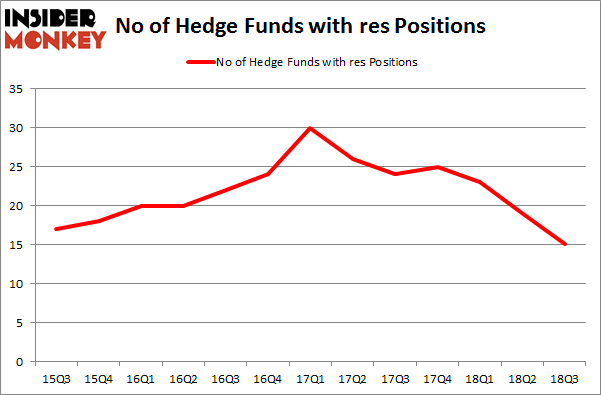 Among these funds, AQR Capital Management held the most valuable stake in RPC, Inc. (NYSE:RES), which was worth $46.8 million at the end of the third quarter. On the second spot was GAMCO Investors which amassed $39 million worth of shares. Moreover, Royce & Associates, Gotham Asset Management, and Fisher Asset Management were also bullish on RPC, Inc. (NYSE:RES), allocating a large percentage of their portfolios to this stock.

Seeing as RPC, Inc. (NYSE:RES) has faced bearish sentiment from the smart money, we can see that there is a sect of hedge funds that slashed their positions entirely by the end of the third quarter. At the top of the heap, Dmitry Balyasny’s Balyasny Asset Management sold off the largest position of all the hedgies followed by Insider Monkey, comprising an estimated $3.2 million in stock. Phil Frohlich’s fund, Prescott Group Capital Management, also dropped its stock, about $2.4 million worth. These bearish behaviors are intriguing to say the least, as total hedge fund interest was cut by 4 funds by the end of the third quarter.

As you can see these stocks had an average of 13.25 hedge funds with bullish positions and the average amount invested in these stocks was $265 million. That figure was $154 million in RES’s case. KapStone Paper and Packaging Corp. (NYSE:KS) is the most popular stock in this table. On the other hand Holly Energy Partners, L.P. (NYSE:HEP) is the least popular one with only 3 bullish hedge fund positions. RPC, Inc. (NYSE:RES) is not the most popular stock in this group but hedge fund interest is still above average. This is a slightly positive signal but we’d rather spend our time researching stocks that hedge funds are piling on. In this regard KS might be a better candidate to consider a long position.