After several tireless days we have finished crunching the numbers from the more than 700 13F filings issued by the elite hedge funds and other investment firms that we track at Insider Monkey, which disclosed those firms’ equity portfolios as of September 30. The results of that effort will be put on display in this article, as we share valuable insight into the smart money sentiment towards Precision Drilling Corp (NYSE:PDS).

Is Precision Drilling Corp (NYSE:PDS) undervalued? Prominent investors are reducing their bets on the stock. The number of long hedge fund bets were cut by 1 lately. Our calculations also showed that pds isn’t among the 30 most popular stocks among hedge funds.

What have hedge funds been doing with Precision Drilling Corp (NYSE:PDS)?

At the end of the third quarter, a total of 15 of the hedge funds tracked by Insider Monkey were long this stock, a change of -6% from one quarter earlier. Below, you can check out the change in hedge fund sentiment towards PDS over the last 13 quarters. So, let’s review which hedge funds were among the top holders of the stock and which hedge funds were making big moves. 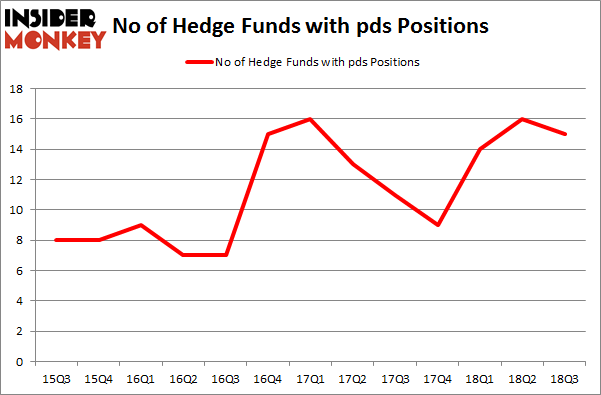 Seeing as Precision Drilling Corp (NYSE:PDS) has faced falling interest from the aggregate hedge fund industry, we can see that there exists a select few hedge funds that elected to cut their entire stakes by the end of the third quarter. Interestingly, Israel Englander’s Millennium Management sold off the biggest position of the “upper crust” of funds followed by Insider Monkey, totaling an estimated $3.4 million in stock, and Noam Gottesman’s GLG Partners was right behind this move, as the fund cut about $1.8 million worth. These moves are important to note, as aggregate hedge fund interest dropped by 1 funds by the end of the third quarter.

As you can see these stocks had an average of 9.5 hedge funds with bullish positions and the average amount invested in these stocks was $60 million. That figure was $47 million in PDS’s case. Bandwidth Inc. (NASDAQ:BAND) is the most popular stock in this table. On the other hand Universal Health Realty Income Trust (NYSE:UHT) is the least popular one with only 4 bullish hedge fund positions. Precision Drilling Corp (NYSE:PDS) is not the most popular stock in this group but hedge fund interest is still above average. This is a slightly positive signal but we’d rather spend our time researching stocks that hedge funds are piling on. In this regard BAND might be a better candidate to consider a long position.