Plains GP Holdings LP (NYSE:PAGP) was in 23 hedge funds’ portfolios at the end of September. PAGP shareholders have witnessed a decrease in support from the world’s most elite money managers in recent months. There were 24 hedge funds in our database with PAGP holdings at the end of the previous quarter. Our calculations also showed that PAGP isn’t among the 30 most popular stocks among hedge funds. 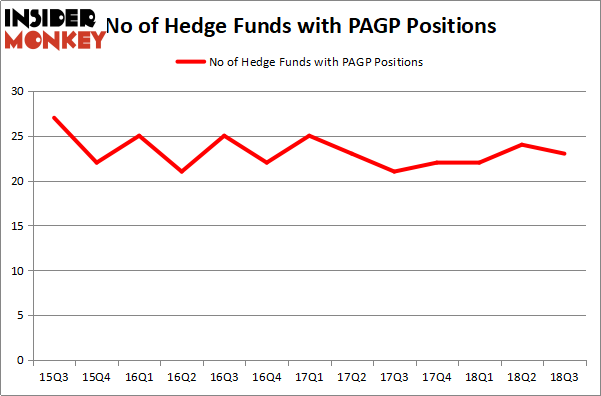 The largest stake in Plains GP Holdings LP (NYSE:PAGP) was held by Point State Capital, which reported holding $87.3 million worth of stock at the end of September. It was followed by Canyon Capital Advisors with a $76.8 million position. Other investors bullish on the company included Renaissance Technologies, Perella Weinberg Partners, and Scopia Capital.

Since Plains GP Holdings LP (NYSE:PAGP) has faced bearish sentiment from the smart money, it’s easy to see that there is a sect of hedge funds that elected to cut their entire stakes heading into Q3. At the top of the heap, Phill Gross and Robert Atchinson’s Adage Capital Management cut the largest investment of the “upper crust” of funds watched by Insider Monkey, worth close to $16.7 million in stock. Paul Reeder and Edward Shapiro’s fund, PAR Capital Management, also cut its stock, about $8.4 million worth. These transactions are interesting, as total hedge fund interest was cut by 1 funds heading into Q3.

As you can see these stocks had an average of 22 hedge funds with bullish positions and the average amount invested in these stocks was $297 million. That figure was $408 million in PAGP’s case. BGC Partners, Inc. (NASDAQ:BGCP) is the most popular stock in this table. On the other hand ALLETE Inc (NYSE:ALE) is the least popular one with only 17 bullish hedge fund positions. Plains GP Holdings LP (NYSE:PAGP) is not the most popular stock in this group but hedge fund interest is still above average. This is a slightly positive signal but we’d rather spend our time researching stocks that hedge funds are piling on. In this regard BGCP might be a better candidate to consider a long position.