Coronavirus is probably the #1 concern in investors’ minds right now. It should be. On February 27th we published this article and predicted that US stocks will go down by at least 20% in the next 3-6 months. We also told you to short the market ETFs and buy long-term bonds. Investors who agreed with us and replicated these trades are up double digits whereas the market is down double digits. In these volatile markets we scrutinize hedge fund filings to get a reading on which direction each stock might be going. The latest 13F reporting period has come and gone, and Insider Monkey is again at the forefront when it comes to making use of this gold mine of data. Insider Monkey finished processing 835 13F filings submitted by hedge funds and prominent investors. These filings show these funds’ portfolio positions as of December 31st, 2019. In this article we are going to take a look at smart money sentiment towards PG&E Corporation (NYSE:PCG).

PG&E Corporation (NYSE:PCG) investors should be aware of a decrease in hedge fund sentiment recently. Our calculations also showed that PCG isn’t among the 30 most popular stocks among hedge funds (click for Q4 rankings and see the video below for Q3 rankings).

We leave no stone unturned when looking for the next great investment idea. For example Europe is set to become the world’s largest cannabis market, so we check out this European marijuana stock pitch. We read hedge fund investor letters and listen to stock pitches at hedge fund conferences, and and go through short-term trade recommendations like this one. We even check out the recommendations of services with hard to believe track records. In January, we recommended a long position in one of the most shorted stocks in the market, and that stock returned more than 50% despite the large losses in the market since our recommendation. Now let’s analyze the latest hedge fund action regarding PG&E Corporation (NYSE:PCG).

Heading into the first quarter of 2020, a total of 50 of the hedge funds tracked by Insider Monkey were long this stock, a change of -24% from the previous quarter. The graph below displays the number of hedge funds with bullish position in PCG over the last 18 quarters. With hedgies’ positions undergoing their usual ebb and flow, there exists a select group of noteworthy hedge fund managers who were upping their stakes considerably (or already accumulated large positions). 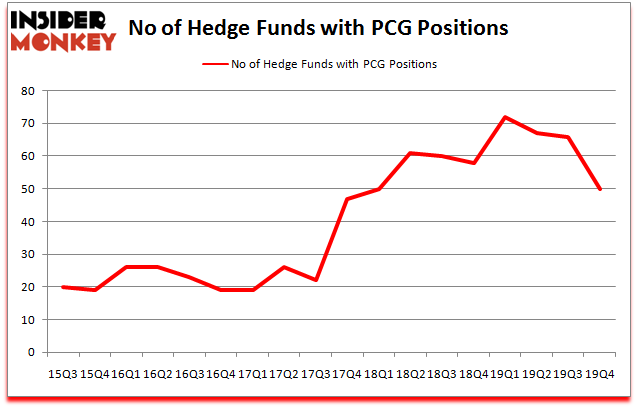 More specifically, Abrams Capital Management was the largest shareholder of PG&E Corporation (NYSE:PCG), with a stake worth $271.8 million reported as of the end of September. Trailing Abrams Capital Management was Anchorage Advisors, which amassed a stake valued at $271.8 million. Silver Point Capital, Pentwater Capital Management, and Baupost Group were also very fond of the stock, becoming one of the largest hedge fund holders of the company. In terms of the portfolio weights assigned to each position Knighthead Capital allocated the biggest weight to PG&E Corporation (NYSE:PCG), around 33.29% of its 13F portfolio. Silver Point Capital is also relatively very bullish on the stock, designating 20.54 percent of its 13F equity portfolio to PCG.

Because PG&E Corporation (NYSE:PCG) has faced bearish sentiment from the aggregate hedge fund industry, logic holds that there were a few money managers who sold off their entire stakes by the end of the third quarter. It’s worth mentioning that Andrew Feldstein and Stephen Siderow’s Blue Mountain Capital dumped the biggest position of all the hedgies tracked by Insider Monkey, totaling about $123.6 million in stock. John Paulson’s fund, Paulson & Co, also sold off its stock, about $26.2 million worth. These moves are important to note, as total hedge fund interest was cut by 16 funds by the end of the third quarter.

As you can see these stocks had an average of 30.75 hedge funds with bullish positions and the average amount invested in these stocks was $409 million. That figure was $2755 million in PCG’s case. OneMain Holdings Inc (NYSE:OMF) is the most popular stock in this table. On the other hand Harley-Davidson, Inc. (NYSE:HOG) is the least popular one with only 19 bullish hedge fund positions. Compared to these stocks PG&E Corporation (NYSE:PCG) is more popular among hedge funds. Our calculations showed that top 20 most popular stocks among hedge funds returned 41.3% in 2019 and outperformed the S&P 500 ETF (SPY) by 10.1 percentage points. These stocks lost 12.9% in 2020 through March 9th but still managed to beat the market by 1.9 percentage points. Hedge funds were also right about betting on PCG as the stock returned 16.1% so far in Q1 (through March 9th) and outperformed the market by an even larger margin. Hedge funds were clearly right about piling into this stock relative to other stocks with similar market capitalizations.