Is Meritage Homes Corp (NYSE:MTH) a healthy stock for your portfolio? The best stock pickers are in a bearish mood. The number of long hedge fund bets went down by 3 lately. MTH was in 13 hedge funds’ portfolios at the end of September. There were 16 hedge funds in our database with MTH positions at the end of the previous quarter. With such a performance, it is hardly surprising the company did not find a place on the 30 most popular stocks among ALL hedge funds.

In today’s marketplace, there are many tools stock market investors can use to evaluate stocks. Some of the less utilized tools are hedge fund and insider trading activity. Our experts have shown that, historically, those who follow the top picks of the elite investment managers can outclass their index-focused peers by a very impressive margin (see the details here).

The seventh-largest public homebuilder in the United States posted revenues of $884.58 million for the quarter ended September 2018, up from year-ago revenues of $805.60 million.

What have hedge funds been doing with Meritage Homes Corp (NYSE:MTH)? 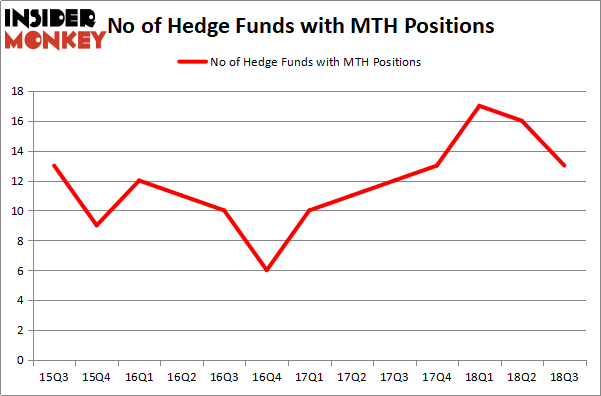 Among these funds, Echo Street Capital Management held the most valuable stake in Meritage Homes Corp (NYSE:MTH), which was worth $70.2 million at the end of the third quarter. On the second spot was Fisher Asset Management which amassed $64.8 million worth of shares. Moreover, Long Pond Capital, East Side Capital (RR Partners), and Citadel Investment Group were also bullish on Meritage Homes Corp (NYSE:MTH), allocating a large percentage of their portfolios to this stock.

Due to the fact that Meritage Homes Corp (NYSE:MTH) has experienced bearish sentiment from hedge fund managers, it’s safe to say that there exists a select few hedgies that slashed their positions entirely in the third quarter. Intriguingly, Israel Englander’s Millennium Management said goodbye to the largest investment of the “upper crust” of funds watched by Insider Monkey, totaling close to $65.3 million in stock, and David Costen Haley’s HBK Investments was right behind this move, as the fund dumped about $0.7 million worth. These moves are important to note, as aggregate hedge fund interest dropped by 3 funds in the third quarter.

As you can see these stocks had an average of 14.25 hedge funds with bullish positions and the average amount invested in these stocks was $125 million. That figure was $224 million in MTH’s case. Papa John’s Int’l, Inc. (NASDAQ:PZZA) is the most popular stock in this table. On the other hand PPDAI Group Inc. (NYSE:PPDF) is the least popular one with only 5 bullish hedge fund positions. Meritage Homes Corp (NYSE:MTH) is not the least popular stock in this group but hedge fund interest is still below average. This is a slightly negative signal and we’d rather spend our time researching stocks that hedge funds are piling on. In this regard PZZA might be a better candidate to consider a long position.