Is Keane Group, Inc. (NYSE:FRAC) the right pick for your portfolio? Hedge funds are becoming less confident. The number of bullish hedge fund bets were trimmed by 1 lately. Our calculations also showed that FRAC isn’t among the 30 most popular stocks among hedge funds. FRAC was in 18 hedge funds’ portfolios at the end of the third quarter of 2018. There were 19 hedge funds in our database with FRAC holdings at the end of the previous quarter.

What does the smart money think about Keane Group, Inc. (NYSE:FRAC)?

At the end of the third quarter, a total of 18 of the hedge funds tracked by Insider Monkey were bullish on this stock, a change of -5% from the second quarter of 2018. On the other hand, there were a total of 15 hedge funds with a bullish position in FRAC at the beginning of this year. With hedge funds’ positions undergoing their usual ebb and flow, there exists a select group of key hedge fund managers who were increasing their holdings meaningfully (or already accumulated large positions). 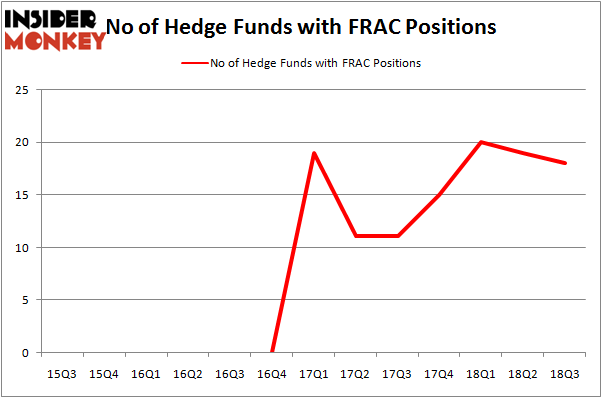 Among these funds, Cerberus Capital Management held the most valuable stake in Keane Group, Inc. (NYSE:FRAC), which was worth $467 million at the end of the third quarter. On the second spot was Omega Advisors which amassed $57.5 million worth of shares. Moreover, Millennium Management, Fisher Asset Management, and Citadel Investment Group were also bullish on Keane Group, Inc. (NYSE:FRAC), allocating a large percentage of their portfolios to this stock.

Because Keane Group, Inc. (NYSE:FRAC) has witnessed bearish sentiment from hedge fund managers, logic holds that there is a sect of fund managers who were dropping their full holdings in the third quarter. It’s worth mentioning that Mark Kingdon’s Kingdon Capital cut the largest investment of the 700 funds followed by Insider Monkey, worth about $8.1 million in stock, and Paul Marshall and Ian Wace’s Marshall Wace LLP was right behind this move, as the fund sold off about $0.5 million worth. These bearish behaviors are important to note, as aggregate hedge fund interest was cut by 1 funds in the third quarter.

As you can see these stocks had an average of 13.75 hedge funds with bullish positions and the average amount invested in these stocks was $125 million. That figure was $648 million in FRAC’s case. Mitel Networks Corporation (NASDAQ:MITL) is the most popular stock in this table. On the other hand MaxLinear, Inc. (NYSE:MXL) is the least popular one with only 4 bullish hedge fund positions. Keane Group, Inc. (NYSE:FRAC) is not the most popular stock in this group but hedge fund interest is still above average. This is a slightly positive signal but we’d rather spend our time researching stocks that hedge funds are piling on. In this regard MITL might be a better candidate to consider a long position.