As we already know from media reports and hedge fund investor letters, many hedge funds lost money in October, blaming macroeconomic conditions and unpredictable events that hit several sectors, with healthcare among them. Nevertheless, most investors decided to stick to their bullish theses and their long-term focus allows us to profit from the recent declines. In particular, let’s take a look at what hedge funds think about Innoviva, Inc. (NASDAQ:INVA) in this article.

Is Innoviva, Inc. (NASDAQ:INVA) a worthy investment now? Money managers are taking a pessimistic view. The number of long hedge fund bets shrunk by 2 in recent months. Our calculations also showed that INVA isn’t among the 30 most popular stocks among hedge funds. INVA was in 22 hedge funds’ portfolios at the end of September. There were 24 hedge funds in our database with INVA positions at the end of the previous quarter.

What have hedge funds been doing with Innoviva, Inc. (NASDAQ:INVA)?

At the end of the third quarter, a total of 22 of the hedge funds tracked by Insider Monkey were bullish on this stock, a change of -8% from one quarter earlier. Below, you can check out the change in hedge fund sentiment towards INVA over the last 13 quarters. With hedge funds’ positions undergoing their usual ebb and flow, there exists an “upper tier” of key hedge fund managers who were increasing their holdings considerably (or already accumulated large positions). 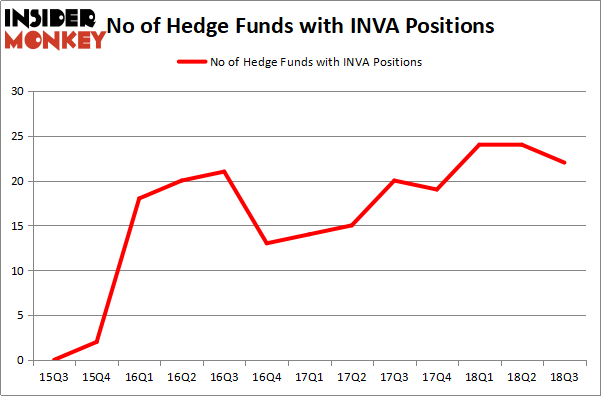 The largest stake in Innoviva, Inc. (NASDAQ:INVA) was held by Renaissance Technologies, which reported holding $71.7 million worth of stock at the end of September. It was followed by Sarissa Capital Management with a $69.1 million position. Other investors bullish on the company included GLG Partners, Consonance Capital Management, and D E Shaw.

Because Innoviva, Inc. (NASDAQ:INVA) has experienced falling interest from hedge fund managers, it’s easy to see that there lies a certain “tier” of hedge funds who were dropping their entire stakes last quarter. At the top of the heap, Peter Muller’s PDT Partners dropped the biggest position of the 700 funds watched by Insider Monkey, worth an estimated $4.2 million in stock. David Costen Haley’s fund, HBK Investments, also said goodbye to its stock, about $2.9 million worth. These moves are intriguing to say the least, as aggregate hedge fund interest was cut by 2 funds last quarter.

As you can see these stocks had an average of 12 hedge funds with bullish positions and the average amount invested in these stocks was $111 million. That figure was $220 million in INVA’s case. Rush Enterprises, Inc. (NASDAQ:RUSHA) is the most popular stock in this table. On the other hand Mazor Robotics Ltd. (NASDAQ:MZOR) is the least popular one with only 8 bullish hedge fund positions. Compared to these stocks Innoviva, Inc. (NASDAQ:INVA) is more popular among hedge funds. Considering that hedge funds are fond of this stock in relation to its market cap peers, it may be a good idea to analyze it in detail and potentially include it in your portfolio.