There are several ways to beat the market, and investing in small cap stocks has historically been one of them. We like to improve the odds of beating the market further by examining what famous hedge fund operators such as Carl Icahn and George Soros think. Those hedge fund operators make billions of dollars each year by hiring the best and the brightest to do research on stocks, including small cap stocks that big brokerage houses simply don’t cover. Because of Carl Icahn and other elite funds’ exemplary historical records, we pay attention to their small cap picks. In this article, we use hedge fund filing data to analyze Hecla Mining Company (NYSE:HL).

Is Hecla Mining Company (NYSE:HL) a first-rate stock to buy now? The smart money is getting less bullish. The number of long hedge fund positions fell by 1 in recent months. Our calculations also showed that HL isn’t among the 30 most popular stocks among hedge funds.

If you’d ask most market participants, hedge funds are perceived as worthless, old investment tools of years past. While there are over 8,000 funds with their doors open today, Our experts hone in on the upper echelon of this club, around 700 funds. These investment experts oversee most of the smart money’s total capital, and by following their best equity investments, Insider Monkey has unearthed a few investment strategies that have historically outrun Mr. Market. Insider Monkey’s flagship hedge fund strategy outrun the S&P 500 index by 6 percentage points per year since its inception in May 2014 through early November 2018. We were able to generate large returns even by identifying short candidates. Our portfolio of short stocks lost 24% since February 2017 (through December 3rd) even though the market was up nearly 23% during the same period. We just shared a list of 11 short targets in our latest quarterly update.

Heading into the fourth quarter of 2018, a total of 11 of the hedge funds tracked by Insider Monkey were bullish on this stock, a change of -8% from the previous quarter. Below, you can check out the change in hedge fund sentiment towards HL over the last 13 quarters. With hedgies’ sentiment swirling, there exists a few noteworthy hedge fund managers who were boosting their holdings meaningfully (or already accumulated large positions). 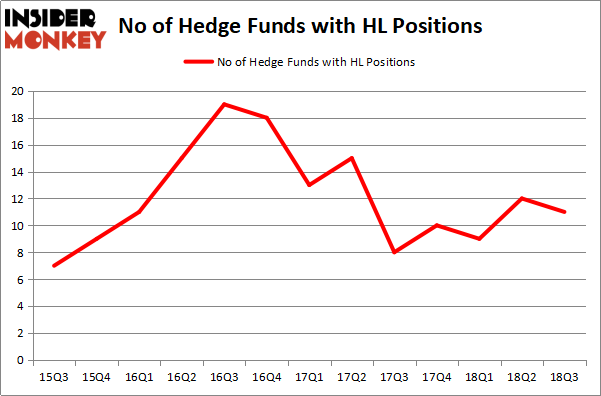 Among these funds, Royce & Associates held the most valuable stake in Hecla Mining Company (NYSE:HL), which was worth $5.7 million at the end of the third quarter. On the second spot was Citadel Investment Group which amassed $5.3 million worth of shares. Moreover, Sprott Asset Management, Millennium Management, and Renaissance Technologies were also bullish on Hecla Mining Company (NYSE:HL), allocating a large percentage of their portfolios to this stock.

Due to the fact that Hecla Mining Company (NYSE:HL) has witnessed falling interest from the entirety of the hedge funds we track, it’s safe to say that there is a sect of hedgies that elected to cut their positions entirely in the third quarter. It’s worth mentioning that Noam Gottesman’s GLG Partners said goodbye to the largest investment of the 700 funds followed by Insider Monkey, totaling an estimated $0.5 million in stock. Matthew Tewksbury’s fund, Stevens Capital Management, also dropped its stock, about $0.2 million worth. These bearish behaviors are important to note, as total hedge fund interest dropped by 1 funds in the third quarter.

As you can see these stocks had an average of 12 hedge funds with bullish positions and the average amount invested in these stocks was $62 million. That figure was $18 million in HL’s case. Pitney Bowes Inc. (NYSE:PBI) is the most popular stock in this table. On the other hand Teekay LNG Partners L.P. (NYSE:TGP) is the least popular one with only 5 bullish hedge fund positions. Hecla Mining Company (NYSE:HL) is not the least popular stock in this group but hedge fund interest is still below average. This is a slightly negative signal and we’d rather spend our time researching stocks that hedge funds are piling on. In this regard PBI might be a better candidate to consider a long position.