At Insider Monkey, we pore over the filings of more than 700 top investment firms every quarter, a process we have now completed for the latest reporting period. The data we’ve gathered as a result gives us access to a wealth of collective knowledge based on these firms’ portfolio holdings as of September 30. In this article, we will use that wealth of knowledge to determine whether or not Gray Television, Inc. (NYSE:GTN) makes for a good investment right now.

Is Gray Television, Inc. (NYSE:GTN) a buy right now? The best stock pickers are taking a pessimistic view. The number of bullish hedge fund positions shrunk by 2 recently. Our calculations also showed that GTN isn’t among the 30 most popular stocks among hedge funds. 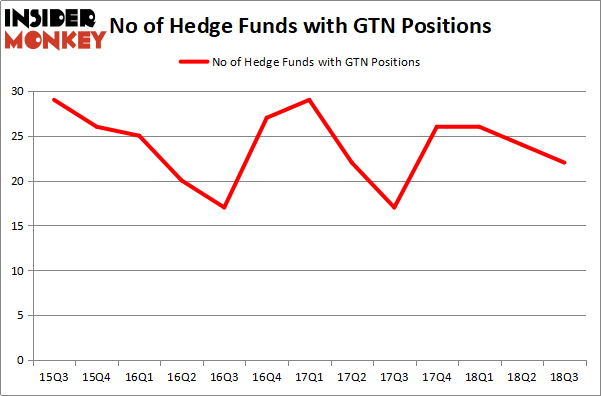 When looking at the institutional investors followed by Insider Monkey, Anand Desai’s Darsana Capital Partners has the biggest position in Gray Television, Inc. (NYSE:GTN), worth close to $140 million, amounting to 4.4% of its total 13F portfolio. Sitting at the No. 2 spot is Three Bays Capital, managed by Matthew Sidman, which holds a $39 million position; 4.6% of its 13F portfolio is allocated to the company. Remaining professional money managers that are bullish include Steve Ketchum’s Sound Point Capital, Israel Englander’s Millennium Management and Mario Gabelli’s GAMCO Investors.

Due to the fact that Gray Television, Inc. (NYSE:GTN) has experienced bearish sentiment from the smart money, it’s safe to say that there was a specific group of funds who were dropping their full holdings last quarter. It’s worth mentioning that Alexander Mitchell’s Scopus Asset Management sold off the largest investment of the “upper crust” of funds watched by Insider Monkey, worth close to $13.4 million in stock, and Bart Baum’s Ionic Capital Management was right behind this move, as the fund said goodbye to about $2.6 million worth. These moves are interesting, as total hedge fund interest fell by 2 funds last quarter.

As you can see these stocks had an average of 12.5 hedge funds with bullish positions and the average amount invested in these stocks was $129 million. That figure was $262 million in GTN’s case. Innoviva, Inc. (NASDAQ:INVA) is the most popular stock in this table. On the other hand Mazor Robotics Ltd. (NASDAQ:MZOR) is the least popular one with only 8 bullish hedge fund positions. Gray Television, Inc. (NYSE:GTN) is not the most popular stock in this group but hedge fund interest is still above average. This is a slightly positive signal but we’d rather spend our time researching stocks that hedge funds are piling on. In this regard INVA might be a better candidate to consider a long position.