Is Freshpet Inc (NASDAQ:FRPT) a good place to invest some of your money right now? We can gain invaluable insight to help us answer that question by studying the investment trends of top investors, who employ world-class Ivy League graduates, who are given immense resources and industry contacts to put their financial expertise to work. The top picks of these firms have historically outperformed the market when we account for known risk factors, making them very valuable investment ideas.

Freshpet Inc (NASDAQ:FRPT) has seen a decrease in enthusiasm from smart money lately. FRPT was in 13 hedge funds’ portfolios at the end of the third quarter of 2018. There were 15 hedge funds in our database with FRPT positions at the end of the previous quarter. Our calculations also showed that FRPT isn’t among the 30 most popular stocks among hedge funds.

Heading into the fourth quarter of 2018, a total of 13 of the hedge funds tracked by Insider Monkey were long this stock, a change of -13% from the previous quarter. The graph below displays the number of hedge funds with bullish position in FRPT over the last 13 quarters. With the smart money’s positions undergoing their usual ebb and flow, there exists an “upper tier” of noteworthy hedge fund managers who were increasing their stakes substantially (or already accumulated large positions). 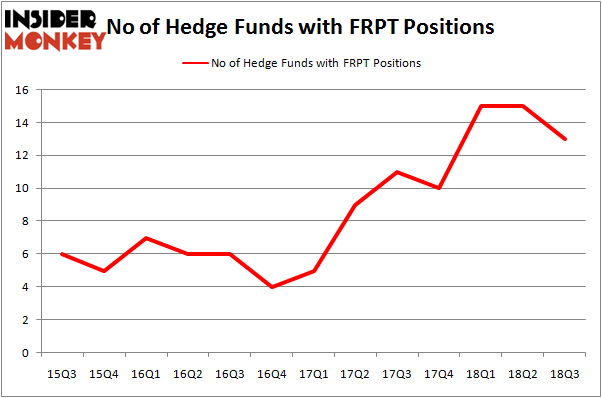 When looking at the institutional investors followed by Insider Monkey, Driehaus Capital, managed by Richard Driehaus, holds the biggest position in Freshpet Inc (NASDAQ:FRPT). Driehaus Capital has a $12.5 million position in the stock, comprising 0.4% of its 13F portfolio. The second most bullish fund manager is Manatuck Hill Partners, led by Mark Broach, holding a $11.2 million position; 4.2% of its 13F portfolio is allocated to the stock. Some other professional money managers with similar optimism comprise Joseph A. Jolson’s Harvest Capital Strategies, Chuck Royce’s Royce & Associates and John Overdeck and David Siegel’s Two Sigma Advisors.

Judging by the fact that Freshpet Inc (NASDAQ:FRPT) has witnessed declining sentiment from the aggregate hedge fund industry, it’s safe to say that there is a sect of fund managers who sold off their full holdings last quarter. It’s worth mentioning that Steven Boyd’s Armistice Capital sold off the largest investment of all the hedgies followed by Insider Monkey, valued at close to $27.5 million in stock. Peter S. Park’s fund, Park West Asset Management, also said goodbye to its stock, about $11.1 million worth. These bearish behaviors are interesting, as total hedge fund interest fell by 2 funds last quarter.

As you can see these stocks had an average of 17.25 hedge funds with bullish positions and the average amount invested in these stocks was $101 million. That figure was $39 million in FRPT’s case. FTS International, Inc. (NYSE:FTSI) is the most popular stock in this table. On the other hand GreenTree Hospitality Group Ltd. (NYSE:GHG) is the least popular one with only 11 bullish hedge fund positions. Freshpet Inc (NASDAQ:FRPT) is not the least popular stock in this group but hedge fund interest is still below average. This is a slightly negative signal and we’d rather spend our time researching stocks that hedge funds are piling on. In this regard FTSI might be a better candidate to consider a long position.

Is Hudbay Minerals Inc. (HBM) A Good Stock To Buy?
Monthly Newsletter Strategy
Download a free copy of our newsletter and see the details inside!
Hedge Fund Resource Center
Related News
Is Freshpet Inc (FRPT) A Good Stock To Buy? 5 Stocks Hedge Funds Are Betting Against Insiders Freshpet Inc (FRPT) Not Attracting Much Smart Money Billionaire Barry Rosenstein Cashes In On Walgreens, While 2 Other Funds Make Bullish Moves On These Stocks Why Are These Five Stocks on the Move Today? 11 Best Inexpensive Bourbons Under $25 That Don’t Taste Cheap 10 Best Vacation Spots for Singles in Their 40’s 15 Highest Paid YouTubers of 2018
Billionaire Hedge Funds