The elite funds run by legendary investors such as Dan Loeb and David Tepper make hundreds of millions of dollars for themselves and their investors by spending enormous resources doing research on small-cap stocks that big investment banks don’t follow. Because of their pay structures, they have a strong incentive to do the research necessary to beat the market. That’s why we pay close attention to what they think in small-cap stocks. In this article, we take a closer look at FactSet Research Systems Inc. (NYSE:FDS) from the perspective of those elite funds.

Is FactSet Research Systems Inc. (NYSE:FDS) the right pick for your portfolio? Hedge funds are getting less bullish. The number of long hedge fund bets were cut by 1 recently. Our calculations also showed that FDS isn’t among the 30 most popular stocks among hedge funds. FDS was in 17 hedge funds’ portfolios at the end of September. There were 18 hedge funds in our database with FDS holdings at the end of the previous quarter.

To the average investor, there are a large number of methods investors employ to analyze stocks. Two of the best methods are hedge fund and insider trading moves. Our researchers have shown that, historically, those who follow the top picks of the best fund managers can beat the S&P 500 by a significant amount (see the details here).

While collecting data for our article, we came Giverny Capital Inc.’s Annual Letter 2017, which offered an opinion on the stock. We bring you that portion of the letter:

“This year’s gold medal is one of high caliber and one that was many years in the making. It is necessary to return to 1998 to find the origin of this error. In early 1998 (a few months before founding Giverny Capital), I went to a high-tech conference in San Francisco. No need to tell you that the word on everyone’s lips was: “Internet”. The young business leaders were daring, flashy and excellent presenters with beautiful computer presentations. The sole exception to this was the president of FactSet Research.

I had never heard of this company but I looked at its numbers in the documents provided to conference attendees. The company was very profitable (one of the few in the group) and I went to the company’s presentation. The president and co-founder was the speaker and he must have been about 70 years old and had no computer or projector. Near the end of his presentation, he pulled out sheets of paper taped together (yes, I was wondering “what are these strange things?”). In this stack of unfolded sheets, one could see the sales and profit growth of the company over 20 years (the company was founded in 1978). Of course, from my seat in the audience, I couldn’t really see anything. But I liked the old-fashioned manner of the president and took the time to study the company in detail upon my return to Montreal.

FactSet sells financial information software and competes with giants like Bloomberg and Thomson Reuters. The company has a successful product, a loyal customer base and is continually gaining market share. It has exceptional profitability and an exemplary balance sheet.

After following the company for a few years, we bought shares of FactSet in 2003. Then we sold them after a slight increase. We briefly rode on the same carousel in 2006. The reason that made me sell was always the same: after a small rise, I found the stock’s valuations too expensive. In fact, the market valuation, without being exaggerated, always seemed too high and that is the main reason we did not have this company in the portfolio for longer periods of time. Yet the company continued to generate exceptional results and the company continued to grow its profits even during the great recession of 2008-2009. At the beginning of 1998, the stock traded at less than $8. The stock hit the $200 level twenty years later. We could have made more than 25 times our money over two decades (an annual return of 18%).”

At Q3’s end, a total of 17 of the hedge funds tracked by Insider Monkey were long this stock, a change of -6% from the second quarter of 2018. By comparison, 17 hedge funds held shares or bullish call options in FDS heading into this year. With the smart money’s positions undergoing their usual ebb and flow, there exists an “upper tier” of noteworthy hedge fund managers who were increasing their holdings meaningfully (or already accumulated large positions). 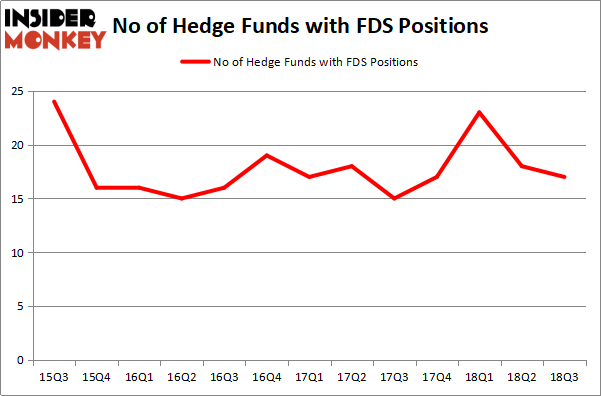 The largest stake in FactSet Research Systems Inc. (NYSE:FDS) was held by Renaissance Technologies, which reported holding $70.2 million worth of stock at the end of September. It was followed by Echo Street Capital Management with a $58.5 million position. Other investors bullish on the company included Markel Gayner Asset Management, Moore Global Investments, and Two Sigma Advisors.

Judging by the fact that FactSet Research Systems Inc. (NYSE:FDS) has witnessed a decline in interest from hedge fund managers, logic holds that there lies a certain “tier” of hedge funds who were dropping their entire stakes by the end of the third quarter. Intriguingly, Peter Rathjens, Bruce Clarke and John Campbell’s Arrowstreet Capital sold off the biggest investment of all the hedgies monitored by Insider Monkey, comprising close to $35.6 million in call options, and Alexander Mitchell’s Scopus Asset Management was right behind this move, as the fund said goodbye to about $24.8 million worth. These transactions are interesting, as total hedge fund interest was cut by 1 fund by the end of the third quarter.

As you can see these stocks had an average of 29.5 hedge funds with bullish positions and the average amount invested in these stocks was $1530 million. That figure was $209 million in FDS’s case. Zayo Group Holdings Inc (NYSE:ZAYO) is the most popular stock in this table. On the other hand, Gol Linhas Aereas Inteligentes SA (NYSE:GOL) is the least popular one with only 4 bullish hedge fund positions. FactSet Research Systems Inc. (NYSE:FDS) is not the least popular stock in this group but hedge fund interest is still below average. This is a slightly negative signal and we’d rather spend our time researching stocks that hedge funds are piling on. In this regard ZAYO might be a better candidate to consider a long position.