Is Expedia Group, Inc. (NASDAQ:EXPE) a first-rate investment now? Money managers are becoming less confident. The number of bullish hedge fund positions shrunk by 7 in recent months. Our calculations also showed that EXPE isn’t among the 30 most popular stocks among hedge funds. EXPE was in 32 hedge funds’ portfolios at the end of March. There were 39 hedge funds in our database with EXPE positions at the end of the previous quarter.

At Q1’s end, a total of 32 of the hedge funds tracked by Insider Monkey held long positions in this stock, a change of -18% from the fourth quarter of 2018. On the other hand, there were a total of 45 hedge funds with a bullish position in EXPE a year ago. With hedge funds’ sentiment swirling, there exists an “upper tier” of noteworthy hedge fund managers who were upping their holdings substantially (or already accumulated large positions). 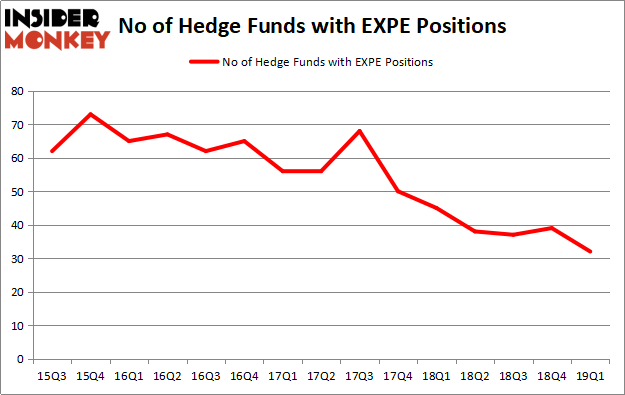 Among these funds, PAR Capital Management held the most valuable stake in Expedia Group, Inc. (NASDAQ:EXPE), which was worth $947.7 million at the end of the first quarter. On the second spot was Altimeter Capital Management which amassed $341.4 million worth of shares. Moreover, Renaissance Technologies, GLG Partners, and D E Shaw were also bullish on Expedia Group, Inc. (NASDAQ:EXPE), allocating a large percentage of their portfolios to this stock.

Since Expedia Group, Inc. (NASDAQ:EXPE) has witnessed declining sentiment from the smart money, logic holds that there were a few money managers who sold off their full holdings by the end of the third quarter. At the top of the heap, Robert Rodriguez and Steven Romick’s First Pacific Advisors LLC cut the largest position of the “upper crust” of funds watched by Insider Monkey, worth an estimated $165 million in stock, and Dennis Puri and Oliver Keller’s Hunt Lane Capital was right behind this move, as the fund said goodbye to about $22.5 million worth. These bearish behaviors are interesting, as aggregate hedge fund interest was cut by 7 funds by the end of the third quarter.

As you can see these stocks had an average of 33.25 hedge funds with bullish positions and the average amount invested in these stocks was $1392 million. That figure was $2091 million in EXPE’s case. DXC Technology Company (NYSE:DXC) is the most popular stock in this table. On the other hand iQIYI, Inc. (NASDAQ:IQ) is the least popular one with only 22 bullish hedge fund positions. Expedia Group, Inc. (NASDAQ:EXPE) is not the least popular stock in this group but hedge fund interest is still below average. This is a slightly negative signal and we’d rather spend our time researching stocks that hedge funds are piling on. Our calculations showed that top 20 most popular stocks among hedge funds returned 1.9% in Q2 through May 30th and outperformed the S&P 500 ETF (SPY) by more than 3 percentage points. Unfortunately EXPE wasn’t nearly as popular as these 20 stocks (hedge fund sentiment was quite bearish); EXPE investors were disappointed as the stock returned -2.2% during the same time period and underperformed the market. If you are interested in investing in large cap stocks with huge upside potential, you should check out the top 20 most popular stocks among hedge funds as 13 of these stocks already outperformed the market so far in Q2.