Is Everbridge, Inc. (NASDAQ:EVBG) a bargain? Prominent investors are becoming less confident. The number of bullish hedge fund bets retreated by 1 in recent months. Our calculations also showed that evbg isn’t among the 30 most popular stocks among hedge funds.

Heading into the fourth quarter of 2018, a total of 19 of the hedge funds tracked by Insider Monkey were long this stock, a change of -5% from the second quarter of 2018. The graph below displays the number of hedge funds with bullish position in EVBG over the last 13 quarters. With hedge funds’ capital changing hands, there exists a few key hedge fund managers who were boosting their holdings meaningfully (or already accumulated large positions). 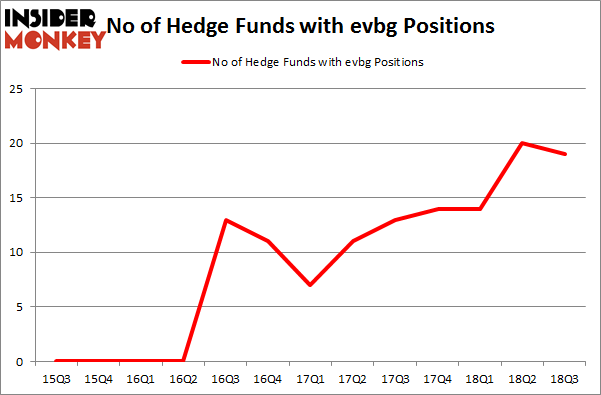 More specifically, Light Street Capital was the largest shareholder of Everbridge, Inc. (NASDAQ:EVBG), with a stake worth $44 million reported as of the end of September. Trailing Light Street Capital was Polar Capital, which amassed a stake valued at $26.5 million. Millennium Management, Driehaus Capital, and Calixto Global Investors were also very fond of the stock, giving the stock large weights in their portfolios.

Since Everbridge, Inc. (NASDAQ:EVBG) has witnessed falling interest from the entirety of the hedge funds we track, we can see that there is a sect of hedgies who sold off their entire stakes by the end of the third quarter. Interestingly, Bruce Garelick’s Garelick Capital Partners cut the largest investment of the “upper crust” of funds followed by Insider Monkey, totaling close to $17.6 million in stock, and Ken Griffin’s Citadel Investment Group was right behind this move, as the fund cut about $4.4 million worth. These transactions are intriguing to say the least, as aggregate hedge fund interest dropped by 1 funds by the end of the third quarter.

As you can see these stocks had an average of 11.75 hedge funds with bullish positions and the average amount invested in these stocks was $49 million. That figure was $199 million in EVBG’s case. Fabrinet (NYSE:FN) is the most popular stock in this table. On the other hand FS Investment Corporation (NYSE:FSIC) is the least popular one with only 9 bullish hedge fund positions. Compared to these stocks Everbridge, Inc. (NASDAQ:EVBG) is more popular among hedge funds. Considering that hedge funds are fond of this stock in relation to its market cap peers, it may be a good idea to analyze it in detail and potentially include it in your portfolio.

Hedge Funds Are Betting On Colfax Corporation (CFX)
Monthly Newsletter Strategy
Download a free copy of our newsletter and see the details inside!
Hedge Fund Resource Center
Related News
What Smart Money Thinks about Everbridge Inc (EVBG)? Everbridge Inc. (EVBG) Could See Upward Move With The Expiration Of The Quiet Period Why Isle of Capri Casinos (ISLE) and KB Home (KBH) Are Among Today’s Gaining Stocks 11 Countries With The Worst Modern Music In The World The Top 5 Robo Advisor Apps of 2018 Five Reasons You Need a Day-Trading Mentor
Billionaire Hedge Funds