How do you pick the next stock to invest in? One way would be to spend hours of research browsing through thousands of publicly traded companies. However, an easier way is to look at the stocks that smart money investors are collectively bullish on. Hedge funds and other institutional investors usually invest large amounts of capital and have to conduct due diligence while choosing their next pick. They don’t always get it right, but, on average, their stock picks historically generated strong returns after adjusting for known risk factors. With this in mind, let’s take a look at the recent hedge fund activity surrounding Euronav NV (NYSE:EURN).

Euronav NV (NYSE:EURN) investors should pay attention to a decrease in support from the world’s most elite money managers lately. Our calculations also showed that EURN isn’t among the 30 most popular stocks among hedge funds.

At Q3’s end, a total of 16 of the hedge funds tracked by Insider Monkey were long this stock, a change of -6% from the second quarter of 2018. On the other hand, there were a total of 7 hedge funds with a bullish position in EURN at the beginning of this year. With the smart money’s positions undergoing their usual ebb and flow, there exists an “upper tier” of notable hedge fund managers who were upping their holdings significantly (or already accumulated large positions). 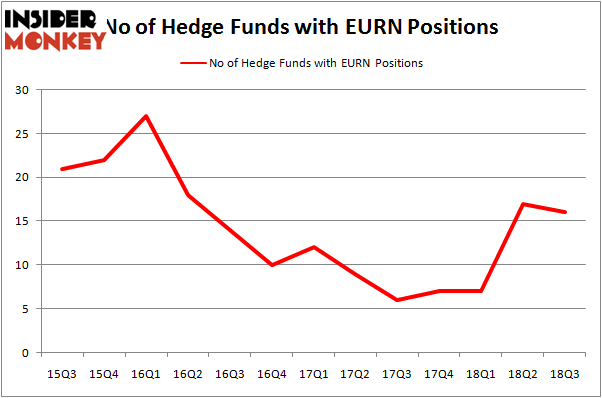 The largest stake in Euronav NV (NYSE:EURN) was held by Oaktree Capital Management, which reported holding $79.9 million worth of stock at the end of September. It was followed by Blue Mountain Capital with a $45.2 million position. Other investors bullish on the company included Carlson Capital, Huber Capital Management, and QVT Financial.

Because Euronav NV (NYSE:EURN) has faced a decline in interest from the aggregate hedge fund industry, we can see that there was a specific group of funds that decided to sell off their positions entirely last quarter. Intriguingly, Marc Lasry’s Avenue Capital said goodbye to the biggest stake of the 700 funds monitored by Insider Monkey, worth about $8 million in stock, and Alec Litowitz and Ross Laser’s Magnetar Capital was right behind this move, as the fund said goodbye to about $4.7 million worth. These moves are important to note, as total hedge fund interest dropped by 1 funds last quarter.

As you can see these stocks had an average of 15.25 hedge funds with bullish positions and the average amount invested in these stocks was $169 million. That figure was $187 million in EURN’s case. Orion Engineered Carbons SA (NYSE:OEC) is the most popular stock in this table. On the other hand Cohen & Steers, Inc. (NYSE:CNS) is the least popular one with only 9 bullish hedge fund positions. Euronav NV (NYSE:EURN) is not the most popular stock in this group but hedge fund interest is still above average. This is a slightly positive signal but we’d rather spend our time researching stocks that hedge funds are piling on. In this regard OEC might be a better candidate to consider a long position.