Hedge fund managers like David Einhorn, Dan Loeb, or Carl Icahn became billionaires through reaping large profits for their investors, which is why piggybacking their stock picks may provide us with significant returns as well. Many hedge funds, like Paul Singer’s Elliott Management, are pretty secretive, but we can still get some insights by analyzing their quarterly 13F filings. One of the most fertile grounds for large abnormal returns is hedge funds’ most popular small-cap picks, which are not so widely followed and often trade at a discount to their intrinsic value. In this article we will check out hedge fund activity in another small-cap stock: DXC Technology Company (NYSE:DXC).

Is DXC Technology Company (NYSE:DXC) a great investment today? Money managers are getting less optimistic. The number of long hedge fund positions fell by 6 lately. Our calculations also showed that DXC isn’t among the 30 most popular stocks among hedge funds. DXC was in 50 hedge funds’ portfolios at the end of the third quarter of 2018. There were 56 hedge funds in our database with DXC holdings at the end of the previous quarter.

At the end of the third quarter, a total of 50 of the hedge funds tracked by Insider Monkey held long positions in this stock, a change of -11% from the previous quarter. On the other hand, there were a total of 60 hedge funds with a bullish position in DXC at the beginning of this year. With hedge funds’ capital changing hands, there exists a select group of noteworthy hedge fund managers who were adding to their holdings substantially (or already accumulated large positions). 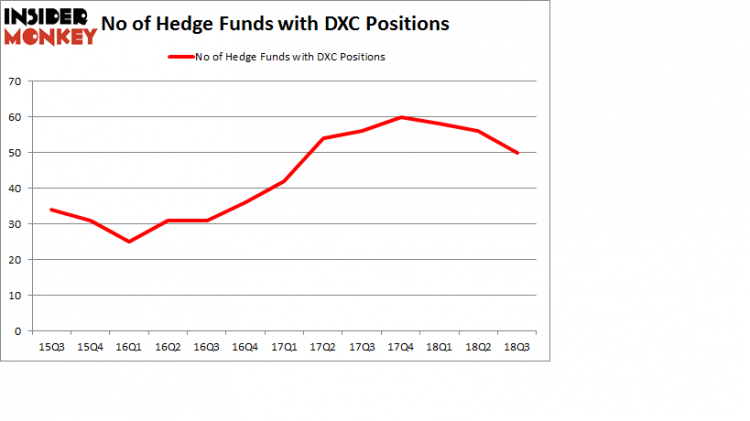 The largest stake in DXC Technology Company (NYSE:DXC) was held by Glenview Capital, which reported holding $447.5 million worth of stock at the end of September. It was followed by Maverick Capital with a $377.7 million position. Other investors bullish on the company included AQR Capital Management, D E Shaw, and Dorsal Capital Management.

Because DXC Technology Company (NYSE:DXC) has witnessed a decline in interest from hedge fund managers, we can see that there were a few hedge funds that decided to sell off their full holdings in the third quarter. At the top of the heap, William B. Gray’s Orbis Investment Management dumped the biggest position of the 700 funds followed by Insider Monkey, totaling about $98.1 million in stock. Dennis Puri and Oliver Keller’s fund, Hunt Lane Capital, also dropped its stock, about $50.8 million worth. These transactions are interesting, as total hedge fund interest dropped by 6 funds in the third quarter.

As you can see these stocks had an average of 27.5 hedge funds with bullish positions and the average amount invested in these stocks was $1.61 billion. That figure was $2.49 billion in DXC’s case. IQVIA Holdings, Inc. (NYSE:IQV) is the most popular stock in this table. On the other hand Energy Transfer Partners LP (NYSE:ETP) is the least popular one with only 13 bullish hedge fund positions. Compared to these stocks DXC Technology Company (NYSE:DXC) is more popular among hedge funds. Considering that hedge funds are fond of this stock in relation to its market cap peers, it may be a good idea to analyze it in detail and potentially include it in your portfolio.