Although the masses and most of the financial media blame hedge funds for their exorbitant fee structure and disappointing performance, these investors have proved to have great stock picking abilities over the years (that’s why their assets under management continue to swell). We believe hedge fund sentiment should serve as a crucial tool of an individual investor’s stock selection process, as it may offer great insights of how the brightest minds of the finance industry feel about specific stocks. After all, these people have access to smartest analysts and expensive data/information sources that individual investors can’t match. So should one consider investing in Dollar General Corp. (NYSE:DG)? The smart money sentiment can provide an answer to this question.

Dollar General Corp. (NYSE:DG) was in 31 hedge funds’ portfolios at the end of the third quarter of 2018. DG has experienced a decrease in hedge fund sentiment recently. There were 35 hedge funds in our database with DG holdings at the end of the previous quarter. Our calculations also showed that DG isn’t among the 30 most popular stocks among hedge funds.

How have hedgies been trading Dollar General Corp. (NYSE:DG)?

At Q3’s end, a total of 31 of the hedge funds tracked by Insider Monkey were bullish on this stock, a change of -11% from one quarter earlier. By comparison, 38 hedge funds held shares or bullish call options in DG heading into this year. With hedge funds’ sentiment swirling, there exists a few key hedge fund managers who were increasing their stakes meaningfully (or already accumulated large positions). 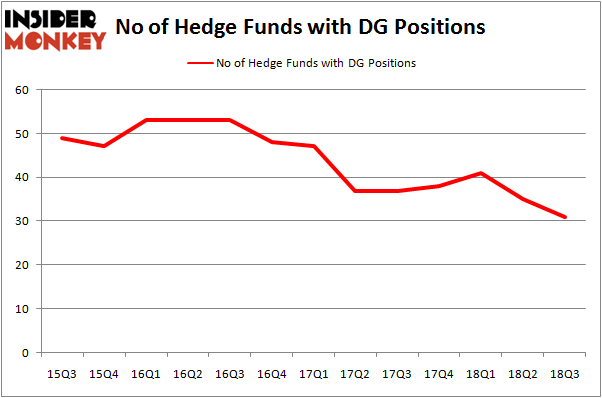 The largest stake in Dollar General Corp. (NYSE:DG) was held by Orbis Investment Management, which reported holding $560.4 million worth of stock at the end of September. It was followed by Arrowstreet Capital with a $351 million position. Other investors bullish on the company included Renaissance Technologies, Appaloosa Management LP, and Millennium Management.

Seeing as Dollar General Corp. (NYSE:DG) has experienced a decline in interest from hedge fund managers, it’s easy to see that there was a specific group of hedge funds that elected to cut their entire stakes heading into Q3. Interestingly, Brandon Haley’s Holocene Advisors dumped the biggest investment of the 700 funds followed by Insider Monkey, worth about $93.9 million in call options. Robert Pohly’s fund, Samlyn Capital, also dumped its call options, about $49.7 million worth. These moves are intriguing to say the least, as total hedge fund interest was cut by 4 funds heading into Q3.

Let’s now take a look at hedge fund activity in other stocks – not necessarily in the same industry as Dollar General Corp. (NYSE:DG) but similarly valued. We will take a look at Yum! Brands, Inc. (NYSE:YUM), Corning Incorporated (NYSE:GLW), Amphenol Corporation (NYSE:APH), and Archer Daniels Midland Company (NYSE:ADM). All of these stocks’ market caps are closest to DG’s market cap.

As you can see these stocks had an average of 28.5 hedge funds with bullish positions and the average amount invested in these stocks was $607 million. That figure was $1.62 billion in DG’s case. Archer Daniels Midland Company (NYSE:ADM) is the most popular stock in this table. On the other hand Amphenol Corporation (NYSE:APH) is the least popular one with only 25 bullish hedge fund positions. Dollar General Corp. (NYSE:DG) is not the most popular stock in this group but hedge fund interest is still above average. This is a slightly positive signal but we’d rather spend our time researching stocks that hedge funds are piling on. In this regard ADM might be a better candidate to consider a long position.