There are several ways to beat the market, and investing in small cap stocks has historically been one of them. We like to improve the odds of beating the market further by examining what famous hedge fund operators such as Carl Icahn and George Soros think. Those hedge fund operators make billions of dollars each year by hiring the best and the brightest to do research on stocks, including small cap stocks that big brokerage houses simply don’t cover. Because of Carl Icahn and other elite funds’ exemplary historical records, we pay attention to their small cap picks. In this article, we use hedge fund filing data to analyze Cannae Holdings, Inc. (NYSE:CNNE).

Cannae Holdings, Inc. (NYSE:CNNE) investors should pay attention to a decrease in support from the world’s most elite money managers in recent months. Our calculations also showed that CNNE isn’t among the 30 most popular stocks among hedge funds.

What does the smart money think about Cannae Holdings, Inc. (NYSE:CNNE)?

Heading into the fourth quarter of 2018, a total of 23 of the hedge funds tracked by Insider Monkey were long this stock, a change of -8% from the previous quarter. On the other hand, there were a total of 19 hedge funds with a bullish position in CNNE at the beginning of this year. With the smart money’s positions undergoing their usual ebb and flow, there exists a select group of noteworthy hedge fund managers who were adding to their holdings meaningfully (or already accumulated large positions). 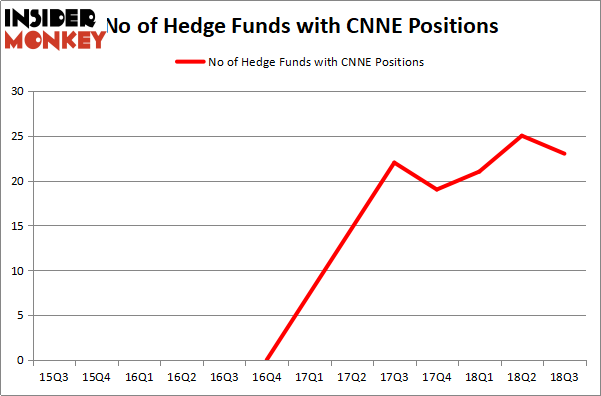 When looking at the institutional investors followed by Insider Monkey, Abdiel Capital Advisors, managed by Colin Moran, holds the biggest position in Cannae Holdings, Inc. (NYSE:CNNE). Abdiel Capital Advisors has a $88.5 million position in the stock, comprising 6.3% of its 13F portfolio. Sitting at the No. 2 spot is Seth Rosen of Nitorum Capital, with a $57.4 million position; 6.4% of its 13F portfolio is allocated to the company. Other peers that hold long positions comprise Frederick DiSanto’s Ancora Advisors, Isaac Corre’s Governors Lane and Leon Lowenstein’s Lionstone Capital Management.

Because Cannae Holdings, Inc. (NYSE:CNNE) has faced declining sentiment from the smart money, we can see that there were a few hedgies that elected to cut their full holdings last quarter. Interestingly, Joe Milano’s Greenhouse Funds cut the largest position of the 700 funds followed by Insider Monkey, valued at an estimated $4.9 million in stock. Peter Rathjens, Bruce Clarke and John Campbell’s fund, Arrowstreet Capital, also said goodbye to its stock, about $1.8 million worth. These moves are interesting, as total hedge fund interest fell by 2 funds last quarter.

As you can see these stocks had an average of 11.5 hedge funds with bullish positions and the average amount invested in these stocks was $128 million. That figure was $237 million in CNNE’s case. Superior Energy Services, Inc. (NYSE:SPN) is the most popular stock in this table. On the other hand Fortress Transportation and Infrastructure Investors LLC (NYSE:FTAI) is the least popular one with only 7 bullish hedge fund positions. Compared to these stocks Cannae Holdings, Inc. (NYSE:CNNE) is more popular among hedge funds. Considering that hedge funds are fond of this stock in relation to its market cap peers, it may be a good idea to analyze it in detail and potentially include it in your portfolio.