Does Brady Corp (NYSE:BRC) represent a good buying opportunity at the moment? Let’s briefly check the hedge fund interest towards the company. Hedge fund firms constantly search out bright intellectuals and highly-experienced employees and throw away millions of dollars on research activities, so it is no wonder why they tend to generate millions in profits each year. It is also true that some hedge fund players fail unconceivably on some occasions, but their stock picks have been generating superior risk-adjusted returns on average over the years.

Brady Corp (NYSE:BRC) investors should pay attention to a decrease in hedge fund interest recently. BRC was in 17 hedge funds’ portfolios at the end of September. There were 19 hedge funds in our database with BRC positions at the end of the previous quarter. Our calculations also showed that BRC isn’t among the 30 most popular stocks among hedge funds.

In the 21st century investor’s toolkit there are dozens of gauges stock traders employ to size up publicly traded companies. Some of the most useful gauges are hedge fund and insider trading moves. Our researchers have shown that, historically, those who follow the best picks of the top investment managers can outclass their index-focused peers by a solid amount (see the details here).

At the end of the third quarter, a total of 17 of the hedge funds tracked by Insider Monkey held long positions in this stock, a change of -11% from one quarter earlier. Below, you can check out the change in hedge fund sentiment towards BRC over the last 13 quarters. So, let’s find out which hedge funds were among the top holders of the stock and which hedge funds were making big moves. 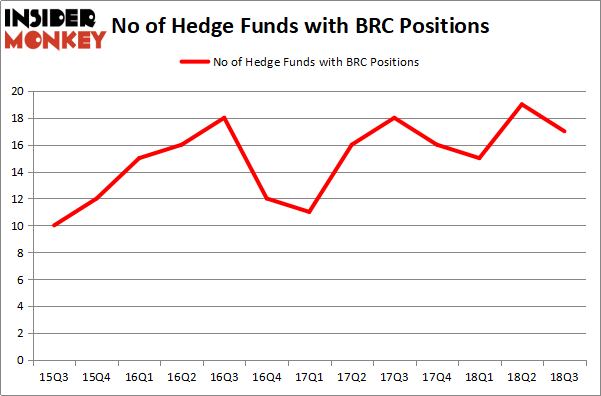 More specifically, Renaissance Technologies was the largest shareholder of Brady Corp (NYSE:BRC), with a stake worth $97.2 million reported as of the end of September. Trailing Renaissance Technologies was Ariel Investments, which amassed a stake valued at $78.4 million. GLG Partners, Millennium Management, and D E Shaw were also very fond of the stock, giving the stock large weights in their portfolios.

Since Brady Corp (NYSE:BRC) has witnessed bearish sentiment from the entirety of the hedge funds we track, logic holds that there exists a select few hedgies that elected to cut their entire stakes heading into Q3. Intriguingly, Dmitry Balyasny’s Balyasny Asset Management dumped the largest stake of the 700 funds watched by Insider Monkey, totaling close to $1.6 million in stock. Joel Greenblatt’s fund, Gotham Asset Management, also cut its stock, about $0.7 million worth. These transactions are interesting, as aggregate hedge fund interest was cut by 2 funds heading into Q3.

As you can see these stocks had an average of 20.5 hedge funds with bullish positions and the average amount invested in these stocks was $265 million. That figure was $241 million in BRC’s case. Jack in the Box Inc. (NASDAQ:JACK) is the most popular stock in this table. On the other hand Trustmark Corp (NASDAQ:TRMK) is the least popular one with only 11 bullish hedge fund positions. Brady Corp (NYSE:BRC) is not the least popular stock in this group but hedge fund interest is still below average. This is a slightly negative signal and we’d rather spend our time researching stocks that hedge funds are piling on. In this regard JACK might be a better candidate to consider a long position.