Atento SA (NYSE:ATTO) shareholders have witnessed a decrease in support from the world’s most elite money managers lately, and the company is certainly not one of the  30 most popular stocks among hedge funds in Q3 of 2018.

While collecting more data about Atento SA (NYSE:ATTO) we came across Dan Roller’s letter to shareholders of Maran Capital Management for the 2017 fourth quarter, in which this hedge fund shares its views on the company. We bring you one part of the report:

“As you know, I look at a number of special situations categories in my constant search for value. One category is equity capital markets activity – in this case, the sale of blocks of stock in secondary transactions. Atento is a company that I have followed for several years since its IPO in 2014. It is the number one business process outsourcing firm in Latin America. Their primary business is the somewhat low margin (EBITDA margins have averaged about 12-13% over the last few years) but also a fairly sticky business of outsourcing call centers (with an increased push of late to offer additional value-added solutions). Atento has had its share of headwinds over the past few years (currency, political instability in Brazil). But over the last year or so, business has improved. The company has reduced leverage, improved margins, and started growing again. The market didn’t miss this, and the stock appreciated from under $8/sh to $12.50/sh over the year through November 2017. With that as the backdrop, Bain, the largest owner, decided to sell just under a quarter of their position (about 19% of the company) in November (they continue to own roughly two-thirds of the shares). Rather than a slight discount to last trade ($12 say, vs. the last trade of $12.50), the secondary offering was priced at $9/sh, nearly 30% lower than the unaffected price. Yes, this is the very same company that the market was willing to pay $12.50/sh for the week prior. (And they say the markets are efficient!) I think the risk/reward in ATTO is fairly compelling. The company is trading for under 5x 2018E EBITDA, about 0.5x sales, and at a double-digit FCF yield. Comparable companies in the US trade for over twice the valuation. Granted, there is more political and currency risk in Brazil, but also better growth prospects. I think intrinsic value is high-teens per share. This would be a logical target for private equity or a US business process outsourcing firm looking to diversify globally, should Bain decide to completely exit from their position (especially after they saw how the market treated their minor divestiture this time around).”

What does the smart money think about Atento SA (NYSE:ATTO)? 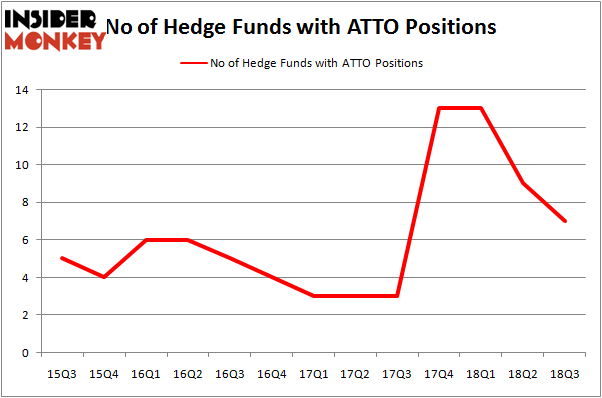 The largest stake in Atento SA (NYSE:ATTO) was held by Royce & Associates, which reported holding $5.2 million worth of stock at the end of September. It was followed by Highland Capital Management with a $1.5 million position. Other investors bullish on the company included Citadel Investment Group, Two Sigma Advisors, and Arrowstreet Capital.

Judging by the fact that Atento SA (NYSE:ATTO) has faced a decline in interest from the smart money, we can see that there is a sect of fund managers who sold off their full holdings heading into Q3. Intriguingly, Israel Englander’s Millennium Management dropped the largest stake of all the hedgies tracked by Insider Monkey, valued at an estimated $0.5 million in stock. Jim Simons’s fund, Renaissance Technologies, also dropped its stock, about $0.4 million worth. These bearish behaviors are intriguing to say the least, as total hedge fund interest was cut by 2 funds heading into Q3.

Let’s check out hedge fund activity in other stocks – not necessarily in the same industry as Atento SA (NYSE:ATTO) but similarly valued. We will take a look at ChipMOS TECHNOLOGIES INC. (NASDAQ:IMOS), Whitestone REIT (NYSE:WSR), Scorpio Bulkers Inc (NYSE:SALT), and The First of Long Island Corporation (NASDAQ:FLIC). All of these stocks’ market caps resemble ATTO’s market cap.

As you can see these stocks had an average of 6.75 hedge funds with bullish positions and the average amount invested in these stocks was $30 million. That figure was $9 million in ATTO’s case. The First of Long Island Corporation (NASDAQ:FLIC) is the most popular stock in this table. On the other hand ChipMOS TECHNOLOGIES INC. (NASDAQ:IMOS) is the least popular one with only 2 bullish hedge fund positions. Atento SA (NYSE:ATTO) is not the most popular stock in this group but hedge fund interest is still above average. This is a slightly positive signal but we’d rather spend our time researching stocks that hedge funds are piling on. In this regard FLIC might be a better candidate to consider a long position.