The latest 13F reporting period has come and gone, and Insider Monkey is again at the forefront when it comes to making use of this gold mine of data. We have processed the filings of the more than 700 world-class investment firms that we track and now have access to the collective wisdom contained in these filings, which are based on their September 30 holdings, data that is available nowhere else. Should you consider AngloGold Ashanti Limited (NYSE:AU) for your portfolio? We’ll look to this invaluable collective wisdom for the answer.

Is AngloGold Ashanti Limited (NYSE:AU) a buy here? The best stock pickers are becoming less confident. The number of bullish hedge fund positions went down by 2 recently. Our calculations also showed that AU isn’t among the 30 most popular stocks among hedge funds.

What have hedge funds been doing with AngloGold Ashanti Limited (NYSE:AU)?

At Q3’s end, a total of 10 of the hedge funds tracked by Insider Monkey were long this stock, a change of -17% from the previous quarter. Below, you can check out the change in hedge fund sentiment towards AU over the last 13 quarters. With the smart money’s capital changing hands, there exists an “upper tier” of noteworthy hedge fund managers who were upping their holdings substantially (or already accumulated large positions). 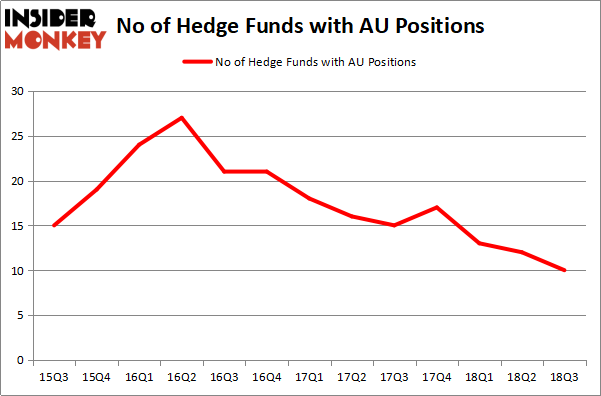 Of the funds tracked by Insider Monkey, Paulson & Co, managed by John Paulson, holds the most valuable position in AngloGold Ashanti Limited (NYSE:AU). Paulson & Co has a $109.7 million position in the stock, comprising 2.1% of its 13F portfolio. Coming in second is Oaktree Capital Management, led by Howard Marks, holding a $33.5 million position; 0.5% of its 13F portfolio is allocated to the stock. Other peers with similar optimism encompass Jim Simons’s Renaissance Technologies, Israel Englander’s Millennium Management and D. E. Shaw’s D E Shaw.

Because AngloGold Ashanti Limited (NYSE:AU) has faced bearish sentiment from the entirety of the hedge funds we track, logic holds that there lies a certain “tier” of fund managers who were dropping their entire stakes by the end of the third quarter. Interestingly, Peter Rathjens, Bruce Clarke and John Campbell’s Arrowstreet Capital cut the largest position of the “upper crust” of funds watched by Insider Monkey, valued at close to $6.8 million in stock, and Matthew Tewksbury’s Stevens Capital Management was right behind this move, as the fund sold off about $0.5 million worth. These moves are intriguing to say the least, as total hedge fund interest dropped by 2 funds by the end of the third quarter.

As you can see these stocks had an average of 24 hedge funds with bullish positions and the average amount invested in these stocks was $234 million. That figure was $193 million in AU’s case. Nomad Foods Limited Ordinary Shares (NYSE:NOMD) is the most popular stock in this table. On the other hand Cracker Barrel Old Country Store, Inc. (NASDAQ:CBRL) is the least popular one with only 12 bullish hedge fund positions. Compared to these stocks AngloGold Ashanti Limited (NYSE:AU) is even less popular than CBRL. Considering that hedge funds aren’t fond of this stock in relation to other companies analyzed in this article, it may be a good idea to analyze it in detail and understand why the smart money isn’t behind this stock. This isn’t necessarily bad news. Although it is possible that hedge funds may think the stock is overpriced and view the stock as a short candidate, they may not be very familiar with the bullish thesis. In either case more research is warranted.