The market has been volatile as the Federal Reserve continues its rate hikes to normalize the interest rates. Small cap stocks have been hit hard as a result, as the Russell 2000 ETF (IWM) has underperformed the larger S&P 500 ETF (SPY) by about 4 percentage points through November 16th. SEC filings and hedge fund investor letters indicate that the smart money seems to be paring back their overall long exposure since summer months, and the funds’ movements is one of the reasons why the major indexes have retraced. In this article, we analyze what the smart money thinks of AeroVironment, Inc. (NASDAQ:AVAV) and find out how it is affected by hedge funds’ moves.

There was a slight increase in the hedge fund ownership of AeroVironment, Inc. (NASDAQ:AVAV) during Q3, which followed several volatile quarters of ownership during the prior year. 13 hedge funds tracked by Insider Monkey’s system were long AVAV at the end of September, which represents a 3-year high, albeit an underwhelming one. Anthony Bozza‘s Lakewood Capital Management is not a fan of the stock, pitching it as a short idea in the fund’s Q2 investor letter. Among other things, Bozza believes the hype around the company’s opportunity in the drone space is completely unwarranted.

“In what may be an attempt to justify the company’s aggressive valuation, investors have also recently turned their focus to the company’s potential in the commercial drone market, which the company pitches as a “multi-billion dollar opportunity.” This business is not new and has generated virtually no sales since it was started in 2013. With a wide array of commercial drones already available on the market, we are skeptical this
business will ever amount to anything substantive. We believe the company is likely worth little more than its historical valuation of 2x revenues, implying a multiple for the stock of around 17x EBITDA (well above other defense companies). At our estimate of $300 million of sustainable revenues, the stock would be worth around $40 per share or roughly 45% below current levels,” the fund wrote in its investor letter.

Today there are a lot of tools market participants use to grade stocks. Two of the most useful tools are hedge fund and insider trading activity. Our experts have shown that, historically, those who follow the best picks of the elite money managers can trounce the S&P 500 by a significant margin (see the details here).

At the end of the third quarter, a total of 13 of the hedge funds tracked by Insider Monkey were long this stock, a rise of 8% from the previous quarter. Below, you can check out the change in hedge fund sentiment towards AVAV over the last 13 quarters. With hedgies’ positions undergoing their usual ebb and flow, there exists a select group of noteworthy hedge fund managers who were adding to their stakes considerably (or already accumulated large positions). 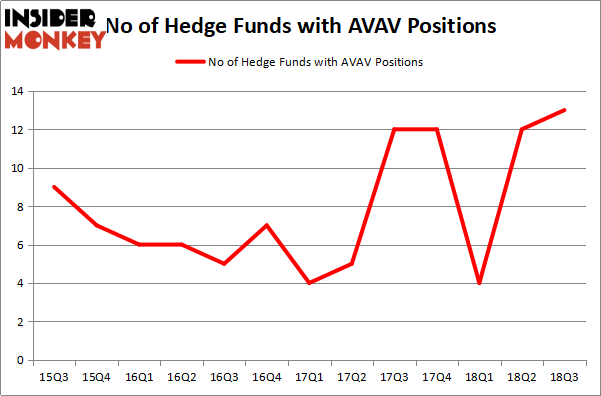 More specifically, Renaissance Technologies was the largest shareholder of AeroVironment, Inc. (NASDAQ:AVAV), with a stake worth $23.5 million reported as of the end of September. Trailing Renaissance Technologies was Citadel Investment Group, which amassed a stake valued at $15.9 million. Fisher Asset Management, D E Shaw, and PEAK6 Capital Management were also very fond of the stock, giving the stock large weights in their portfolios.

As you can see these stocks had an average of 14 hedge funds with bullish positions and the average amount invested in these stocks was $270 million. That figure was $53 million in AVAV’s case. Esterline Technologies Corporation (NYSE:ESL) is the most popular stock in this table. On the other hand China Biologic Products Inc (NASDAQ:CBPO) is the least popular one with only 8 bullish hedge fund positions. AeroVironment, Inc. (NASDAQ:AVAV) is not the least popular stock in this group but hedge fund interest is still below average. This is a slightly negative signal and we’d rather spend our time researching stocks that hedge funds are piling on, like ESL.