Hedge Funds Are Warming Up To Groupon Inc (GRPN) Again

While the market driven by short-term sentiment influenced by the accomodative interest rate environment in the US, increasing oil prices and optimism towards the resolution of the trade war with China, many smart money investors kept their cautious approach regarding the current bull run in the first quarter and hedging or reducing many of their long positions. However, as we know, big investors usually buy stocks with strong fundamentals, which is why we believe we can profit from imitating them. In this article, we are going to take a look at the smart money sentiment surrounding Groupon Inc (NASDAQ:GRPN).

Is Groupon Inc (NASDAQ:GRPN) a superb investment today? The smart money is getting more optimistic. The number of bullish hedge fund bets rose by 2 lately. Our calculations also showed that GRPN isn’t among the 30 most popular stocks among hedge funds.

Heading into the second quarter of 2019, a total of 26 of the hedge funds tracked by Insider Monkey were long this stock, a change of 8% from one quarter earlier. Below, you can check out the change in hedge fund sentiment towards GRPN over the last 15 quarters. With hedge funds’ capital changing hands, there exists a few notable hedge fund managers who were upping their holdings substantially (or already accumulated large positions). 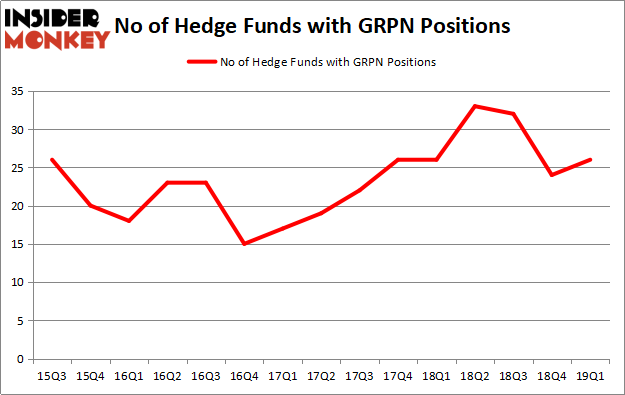 As industrywide interest jumped, some big names were breaking ground themselves. Maverick Capital, managed by Lee Ainslie, established the most valuable position in Groupon Inc (NASDAQ:GRPN). Maverick Capital had $24.5 million invested in the company at the end of the quarter. Joshua Nash’s Ulysses Management also made a $22.2 million investment in the stock during the quarter. The other funds with new positions in the stock are Matthew Hulsizer’s PEAK6 Capital Management, Israel Englander’s Millennium Management, and Michael Platt and William Reeves’s BlueCrest Capital Mgmt..