JPMorgan Chase & Co. (NYSE:JPM) investors should be aware of a decrease in enthusiasm from smart money at the margin. However, our calculations also showed that JPM ranks 21st overall among the 30 most popular stocks among hedge funds.

Today there are numerous indicators stock market investors can use to value publicly traded companies. A duo of the most underrated indicators are hedge fund and insider trading indicators. We have shown that, historically, those who follow the best picks of the top money managers can outperform the broader indices by a significant margin (see the details here).

Unlike the largest US hedge funds that are convinced Dow will soar past 40,000 or the world’s most bearish hedge fund that’s more convinced than ever that a crash is coming, our long-short investment strategy doesn’t rely on bull or bear markets to deliver double digit returns. We only rely on the best performing hedge funds‘ buy/sell signals. We’re going to take a glance at the latest hedge fund action surrounding JPMorgan Chase & Co. (NYSE:JPM).

What does smart money think about JPMorgan Chase & Co. (NYSE:JPM)? 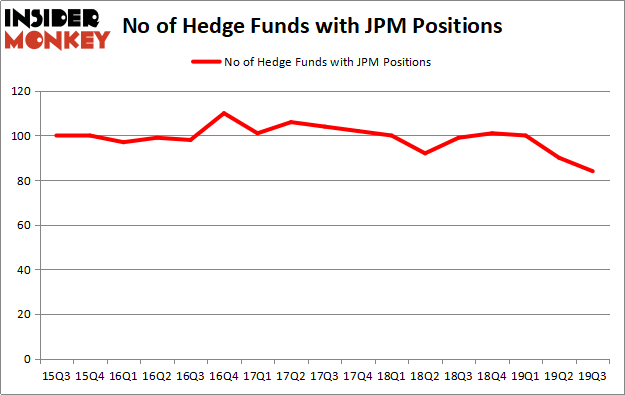 When looking at the institutional investors followed by Insider Monkey, Warren Buffett’s Berkshire Hathaway has the number one position in JPMorgan Chase & Co. (NYSE:JPM), worth close to $7.0043 billion, corresponding to 3.3% of its total 13F portfolio. Sitting at the No. 2 spot is Ken Fisher of Fisher Asset Management, with a $702 million position; 0.8% of its 13F portfolio is allocated to the company. Some other hedge funds and institutional investors that hold long positions consist of Phill Gross and Robert Atchinson’s Adage Capital Management, Richard S. Pzena’s Pzena Investment Management and Ric Dillon’s Diamond Hill Capital. In terms of the portfolio weights assigned to each position Brave Warrior Capital allocated the biggest weight to JPMorgan Chase & Co. (NYSE:JPM), around 12.73% of its portfolio. Sirios Capital Management is also relatively very bullish on the stock, earmarking 5.69 percent of its 13F equity portfolio to JPM.

Because JPMorgan Chase & Co. (NYSE:JPM) has experienced falling interest from the smart money, it’s easy to see that there lies a certain “tier” of funds who were dropping their entire stakes heading into Q4. Intriguingly, Benjamin A. Smith’s Laurion Capital Management cut the largest position of the “upper crust” of funds watched by Insider Monkey, totaling about $13.5 million in stock, and Jonathan Kolatch’s Redwood Capital Management was right behind this move, as the fund dumped about $11.1 million worth. These transactions are important to note, as total hedge fund interest was cut by 6 funds heading into Q4.

As you can see these stocks had an average of 50.5 hedge funds with bullish positions and the average amount invested in these stocks was $6570 million. That figure was $11167 million in JPM’s case. Johnson & Johnson (NYSE:JNJ) is the most popular stock in this table. On the other hand Nestle SA (OTCMKTS:NSRGY) is the least popular one with only 4 bullish hedge fund positions. Compared to these stocks JPMorgan Chase & Co. (NYSE:JPM) is more popular among hedge funds. Our calculations showed that top 20 most popular stocks among hedge funds returned 34.7% in 2019 through November 22nd and outperformed the S&P 500 ETF (SPY) by 8.5 percentage points. Hedge funds were also right about betting on JPM as the stock returned 12% during Q4 (through 11/22) and outperformed the market by an even larger margin. Hedge funds were clearly right about piling into this stock relative to other stocks with similar market capitalizations.