Is Zillow Group Inc (Z) A Good Stock To Buy According To Hedge Funds?

Zillow Group Inc (NASDAQ:Z) has seen a bi decrease in activity from the world’s largest hedge funds lately, ranking as one of 10 Stocks Hedge Funds Ditched in Q3 Just Before the Market Crushed Them. Unsurprisingly, it also failed to rank among the 30 Most Popular Stocks Among Hedge Funds. Z was in 22 hedge funds’ portfolios at the end of September, down from 36 in the middle of 2018.

What have hedge funds been doing with Zillow Group Inc (NASDAQ:Z)? 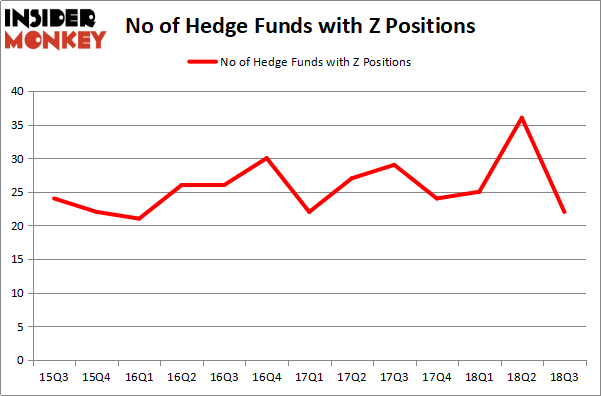 According to publicly available hedge fund and institutional investor holdings data compiled by Insider Monkey, John H. Scully’s SPO Advisory Corp has the largest position in Zillow Group Inc (NASDAQ:Z), worth close to $297.5 million, amounting to 7.3% of its total 13F portfolio. On SPO Advisory Corp’s heels is Karthik Sarma of SRS Investment Management, with a $124.6 million position; 2.6% of its 13F portfolio is allocated to the company. Some other peers that hold long positions contain Christopher R. Hansen’s Valiant Capital and David Goel and Paul Ferri’s Matrix Capital Management.

As you can see these stocks had an average of 16 hedge funds with bullish positions and the average amount invested in these stocks was $289 million. That figure was $755 million in Z’s case. BorgWarner Inc. (NYSE:BWA) is the most popular stock in this table. On the other hand iShares MSCI ACWI Index Fund (NASDAQ:ACWI) is the least popular one with only 8 bullish hedge fund positions. Zillow Group Inc (NASDAQ:Z) is still tied for the most popular stock in this group, but we would like to see hedge fund ownership stabilize before we consider looking into it further.