Is Zebra Technologies Corporation (NASDAQ:ZBRA) an exceptional investment right now? Money managers are taking a pessimistic view. The number of bullish hedge fund positions were cut by 5 lately. Our calculations also showed that zbra isn’t among the 30 most popular stocks among hedge funds. ZBRA was in 27 hedge funds’ portfolios at the end of September. There were 32 hedge funds in our database with ZBRA positions at the end of the previous quarter. 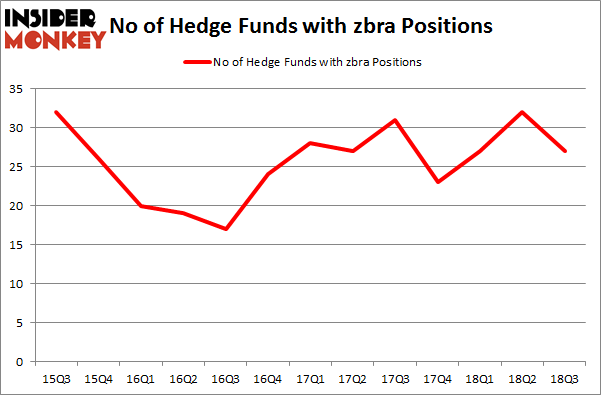 When looking at the institutional investors followed by Insider Monkey, Ariel Investments, managed by John W. Rogers, holds the number one position in Zebra Technologies Corporation (NASDAQ:ZBRA). Ariel Investments has a $183.7 million position in the stock, comprising 2% of its 13F portfolio. The second most bullish fund manager is Makaira Partners, managed by Thomas Bancroft, which holds a $133.2 million position; 13.9% of its 13F portfolio is allocated to the stock. Some other hedge funds and institutional investors that are bullish include Principal Global Investors’s Columbus Circle Investors, Edward Goodnow’s Goodnow Investment Group and Cliff Asness’s AQR Capital Management.

Seeing as Zebra Technologies Corporation (NASDAQ:ZBRA) has faced falling interest from the entirety of the hedge funds we track, logic holds that there is a sect of hedge funds who were dropping their entire stakes by the end of the third quarter. At the top of the heap, Robert Joseph Caruso’s Select Equity Group said goodbye to the largest investment of all the hedgies watched by Insider Monkey, worth about $53.8 million in stock, and George Hall’s Clinton Group was right behind this move, as the fund dropped about $5.1 million worth. These bearish behaviors are interesting, as aggregate hedge fund interest dropped by 5 funds by the end of the third quarter.

As you can see these stocks had an average of 22.75 hedge funds with bullish positions and the average amount invested in these stocks was $425 million. That figure was $893 million in ZBRA’s case. Avery Dennison Corporation (NYSE:AVY) is the most popular stock in this table. On the other hand Shaw Communications Inc (NYSE:SJR) is the least popular one with only 16 bullish hedge fund positions. Zebra Technologies Corporation (NASDAQ:ZBRA) is not the most popular stock in this group but hedge fund interest is still above average. This is a slightly positive signal but we’d rather spend our time researching stocks that hedge funds are piling on. In this regard AVY might be a better candidate to consider a long position.