As we already know from media reports and hedge fund investor letters, many hedge funds lost money in October, blaming macroeconomic conditions and unpredictable events that hit several sectors, with healthcare among them. Nevertheless, most investors decided to stick to their bullish theses and their long-term focus allows us to profit from the recent declines. In particular, let’s take a look at what hedge funds think about Wyndham Destinations, Inc. (NYSE:WYND) in this article.

Wyndham Destinations, Inc. (NYSE:WYND) was in 22 hedge funds’ portfolios at the end of September. WYND has seen a decrease in support from the world’s most elite money managers recently. There were 29 hedge funds in our database with WYND holdings at the end of the previous quarter. Our calculations also showed that wynd isn’t among the 30 most popular stocks among hedge funds.

If you’d ask most market participants, hedge funds are assumed to be slow, outdated investment vehicles of the past. While there are more than 8,000 funds in operation today, Our experts hone in on the crème de la crème of this club, approximately 700 funds. It is estimated that this group of investors administer the lion’s share of the smart money’s total asset base, and by watching their matchless stock picks, Insider Monkey has found various investment strategies that have historically beaten the broader indices. Insider Monkey’s flagship hedge fund strategy outperformed the S&P 500 index by 6 percentage points a year since its inception in May 2014 through early November 2018. We were able to generate large returns even by identifying short candidates. Our portfolio of short stocks lost 24% since February 2017 (through December 3rd) even though the market was up nearly 23% during the same period. We just shared a list of 11 short targets in our latest quarterly update.

At the end of the third quarter, a total of 22 of the hedge funds tracked by Insider Monkey held long positions in this stock, a change of -24% from the previous quarter. Below, you can check out the change in hedge fund sentiment towards WYND over the last 13 quarters. With the smart money’s capital changing hands, there exists a few noteworthy hedge fund managers who were boosting their stakes significantly (or already accumulated large positions). 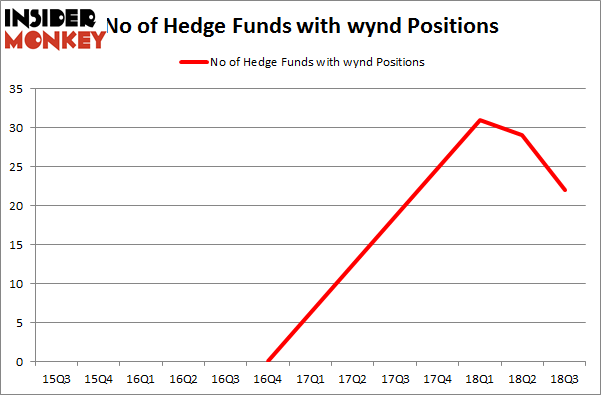 The largest stake in Wyndham Destinations, Inc. (NYSE:WYND) was held by Iridian Asset Management, which reported holding $380.1 million worth of stock at the end of September. It was followed by Gates Capital Management with a $61.1 million position. Other investors bullish on the company included Bodenholm Capital, Tremblant Capital, and Millennium Management.

Seeing as Wyndham Destinations, Inc. (NYSE:WYND) has experienced a decline in interest from the entirety of the hedge funds we track, we can see that there exists a select few hedge funds that decided to sell off their positions entirely last quarter. At the top of the heap, Gabriel Plotkin’s Melvin Capital Management dumped the largest stake of the 700 funds tracked by Insider Monkey, comprising about $26.6 million in stock, and Ken Heebner’s Capital Growth Management was right behind this move, as the fund dumped about $24.8 million worth. These bearish behaviors are intriguing to say the least, as aggregate hedge fund interest was cut by 7 funds last quarter.

As you can see these stocks had an average of 19.25 hedge funds with bullish positions and the average amount invested in these stocks was $415 million. That figure was $607 million in WYND’s case. Olin Corporation (NYSE:OLN) is the most popular stock in this table. On the other hand Hutchison China MediTech Limited (NASDAQ:HCM) is the least popular one with only 9 bullish hedge fund positions. Wyndham Destinations, Inc. (NYSE:WYND) is not the most popular stock in this group but hedge fund interest is still above average. This is a slightly positive signal but we’d rather spend our time researching stocks that hedge funds are piling on. In this regard OLN might be a better candidate to consider a long position.