Is Spirit Realty Capital Inc (NYSE:SRC) a buy, sell, or hold? Money managers are taking a pessimistic view. The number of bullish hedge fund bets dropped by 8 in recent months. Our calculations also showed that SRC isn’t among the 30 most popular stocks among hedge funds.

What have hedge funds been doing with Spirit Realty Capital Inc (NYSE:SRC)? 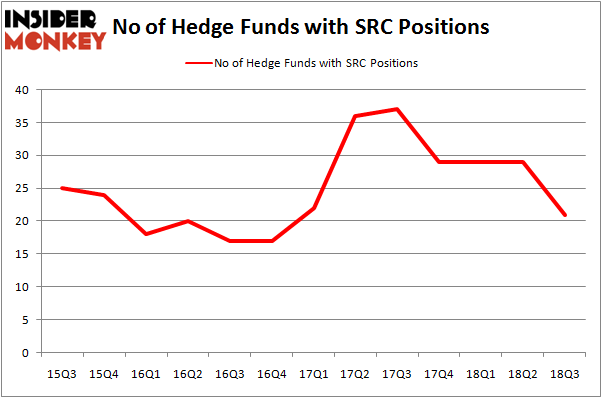 Among these funds, Scopia Capital held the most valuable stake in Spirit Realty Capital Inc (NYSE:SRC), which was worth $150.7 million at the end of the third quarter. On the second spot was Knighthead Capital which amassed $72.8 million worth of shares. Moreover, Arrowstreet Capital, Renaissance Technologies, and Permian Investment Partners were also bullish on Spirit Realty Capital Inc (NYSE:SRC), allocating a large percentage of their portfolios to this stock.

Because Spirit Realty Capital Inc (NYSE:SRC) has witnessed a decline in interest from the aggregate hedge fund industry, we can see that there exists a select few hedgies that elected to cut their positions entirely heading into Q3. It’s worth mentioning that Michael Weinstock’s Monarch Alternative Capital dumped the biggest position of the “upper crust” of funds watched by Insider Monkey, totaling about $42.9 million in stock, and John Orrico’s Water Island Capital was right behind this move, as the fund cut about $12.6 million worth. These moves are intriguing to say the least, as total hedge fund interest fell by 8 funds heading into Q3.

As you can see these stocks had an average of 21 hedge funds with bullish positions and the average amount invested in these stocks was $407 million. That figure was $466 million in SRC’s case. Blueprint Medicines Corporation (NASDAQ:BPMC) is the most popular stock in this table. On the other hand Eastgroup Properties Inc (NYSE:EGP) is the least popular one with only 5 bullish hedge fund positions. Spirit Realty Capital Inc (NYSE:SRC) is not the least popular stock in this group but hedge fund interest is still below average. This is a slightly negative signal and we’d rather spend our time researching stocks that hedge funds are piling on. In this regard BPMC might be a better candidate to consider a long position.