Par Pacific Holdings, Inc. (NYSE:PARR) was in 17 hedge funds’ portfolios at the end of September. PARR shareholders have witnessed a decrease in support from the world’s most elite money managers of late. There were 21 hedge funds in our database with PARR holdings at the end of the previous quarter. Our calculations also showed that PARR isn’t among the 30 most popular stocks among hedge funds.

What does the smart money think about Par Pacific Holdings, Inc. (NYSE:PARR)?

Heading into the fourth quarter of 2018, a total of 17 of the hedge funds tracked by Insider Monkey held long positions in this stock, a change of -19% from the previous quarter. Below, you can check out the change in hedge fund sentiment towards PARR over the last 13 quarters. With hedge funds’ positions undergoing their usual ebb and flow, there exists an “upper tier” of notable hedge fund managers who were upping their holdings significantly (or already accumulated large positions). 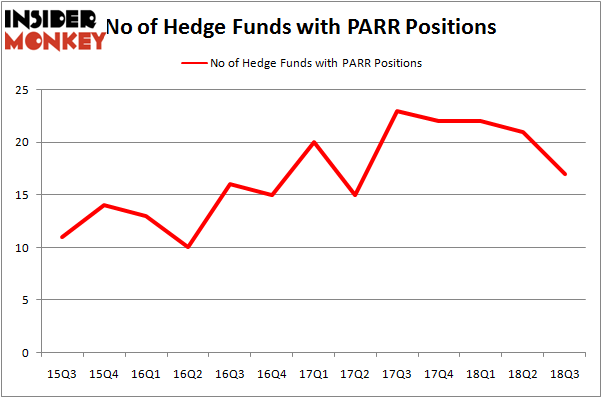 Of the funds tracked by Insider Monkey, Whitebox Advisors, managed by Andy Redleaf, holds the most valuable position in Par Pacific Holdings, Inc. (NYSE:PARR). Whitebox Advisors has a $64.4 million position in the stock, comprising 2% of its 13F portfolio. Sitting at the No. 2 spot is Park West Asset Management, managed by Peter S. Park, which holds a $34.1 million position; the fund has 1.2% of its 13F portfolio invested in the stock. Other professional money managers that are bullish encompass Jim Simons’s Renaissance Technologies, Daniel Beltzman and Gergory Smith’s Birch Run Capital and Miguel Fidalgo’s Triarii Capital.

Since Par Pacific Holdings, Inc. (NYSE:PARR) has faced falling interest from hedge fund managers, it’s safe to say that there is a sect of hedgies who were dropping their positions entirely by the end of the third quarter. Interestingly, Michael Barnes and Arif Inayatullah’s Tricadia Capital Management sold off the largest investment of all the hedgies watched by Insider Monkey, valued at an estimated $8.5 million in stock. Peter Schliemann’s fund, Rutabaga Capital Management, also said goodbye to its stock, about $7.6 million worth. These transactions are interesting, as aggregate hedge fund interest dropped by 4 funds by the end of the third quarter.

As you can see these stocks had an average of 14.75 hedge funds with bullish positions and the average amount invested in these stocks was $109 million. That figure was $144 million in PARR’s case. Denny’s Corporation (NASDAQ:DENN) is the most popular stock in this table. On the other hand Tuniu Corporation (NASDAQ:TOUR) is the least popular one with only 3 bullish hedge fund positions. Par Pacific Holdings, Inc. (NYSE:PARR) is not the most popular stock in this group but hedge fund interest is still above average. This is a slightly positive signal but we’d rather spend our time researching stocks that hedge funds are piling on. In this regard DENN might be a better candidate to consider a long position.