Most investors tend to think that hedge funds and other asset managers are worthless, as they cannot beat even simple index fund portfolios. In fact, most people expect hedge funds to compete with and outperform the bull market that we have witnessed over the past few years. However, hedge funds are generally partially hedged and aim at delivering attractive risk-adjusted returns rather than following the ups and downs of equity markets hoping that they will outperform the broader market. Our research shows that hedge funds do have great stock picking skills, so let’s take a glance at the smart money sentiment towards OFG Bancorp (NYSE:OFG).

OFG Bancorp (NYSE:OFG) was in 11 hedge funds’ portfolios at the end of the third quarter of 2018. OFG shareholders have witnessed a decrease in hedge fund interest in recent months. There were 14 hedge funds in our database with OFG holdings at the end of the previous quarter. Our calculations also showed that ofg isn’t among the 30 most popular stocks among hedge funds.

At the end of the third quarter, a total of 11 of the hedge funds tracked by Insider Monkey were bullish on this stock, a change of -21% from one quarter earlier. On the other hand, there were a total of 10 hedge funds with a bullish position in OFG at the beginning of this year. With hedgies’ capital changing hands, there exists an “upper tier” of noteworthy hedge fund managers who were increasing their stakes considerably (or already accumulated large positions). 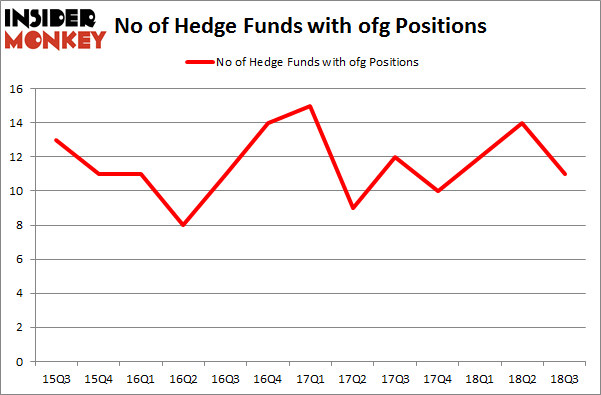 The largest stake in OFG Bancorp (NYSE:OFG) was held by GLG Partners, which reported holding $10.2 million worth of stock at the end of September. It was followed by Arrowstreet Capital with a $7.3 million position. Other investors bullish on the company included Renaissance Technologies, EJF Capital, and PEAK6 Capital Management.

Seeing as OFG Bancorp (NYSE:OFG) has faced falling interest from the smart money, logic holds that there exists a select few hedge funds that decided to sell off their full holdings in the third quarter. Intriguingly, Clint Carlson’s Carlson Capital said goodbye to the biggest investment of the “upper crust” of funds followed by Insider Monkey, worth an estimated $11.4 million in stock. Bernard Horn’s fund, Polaris Capital Management, also cut its stock, about $4.4 million worth. These bearish behaviors are interesting, as total hedge fund interest fell by 3 funds in the third quarter.

As you can see these stocks had an average of 8.75 hedge funds with bullish positions and the average amount invested in these stocks was $46 million. That figure was $37 million in OFG’s case. Flexion Therapeutics Inc (NASDAQ:FLXN) is the most popular stock in this table. On the other hand KNOT Offshore Partners LP (NYSE:KNOP) is the least popular one with only 4 bullish hedge fund positions. OFG Bancorp (NYSE:OFG) is not the most popular stock in this group but hedge fund interest is still above average. This is a slightly positive signal but we’d rather spend our time researching stocks that hedge funds are piling on. In this regard FLXN might be a better candidate to consider a long position.