Hedge funds are not perfect. They have their bad picks just like everyone else. Facebook, a stock hedge funds have loved, lost a third of its value since the end of July. Although hedge funds are not perfect, their consensus picks do deliver solid returns, however. Our data show the top 30 S&P 500 stocks among hedge funds at the end of September 2018 yielded an average return of 6.7% year-to-date, vs. a gain of 2.6% for the S&P 500 Index. Because hedge funds have a lot of resources and their consensus picks do well, we pay attention to what they think. In this article, we analyze what the elite funds think of Old National Bancorp (NYSE:ONB).

Is Old National Bancorp (NYSE:ONB) a bargain? Hedge funds are in a pessimistic mood. The number of bullish hedge fund bets decreased by 2 lately. Our calculations also showed that ONB isn’t among the 30 most popular stocks among hedge funds. ONB was in 6 hedge funds’ portfolios at the end of September. There were 8 hedge funds in our database with ONB holdings at the end of the previous quarter. 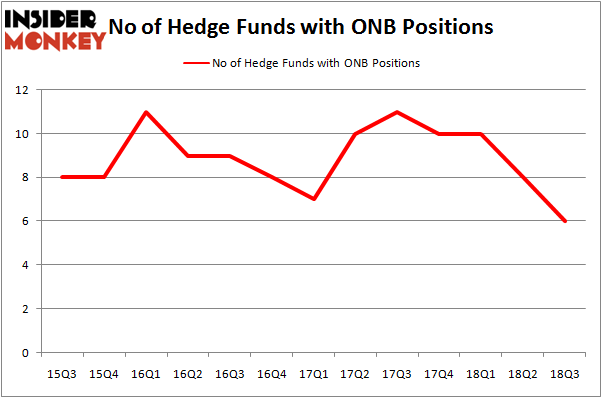 Of the funds tracked by Insider Monkey, Matthew Lindenbaum’s Basswood Capital has the number one position in Old National Bancorp (NYSE:ONB), worth close to $10.7 million, comprising 0.5% of its total 13F portfolio. The second most bullish fund manager is Balyasny Asset Management, managed by Dmitry Balyasny, which holds a $5.8 million position; the fund has less than 0.1%% of its 13F portfolio invested in the stock. Some other peers that are bullish comprise Gregg J. Powers’s Private Capital Management, Noam Gottesman’s GLG Partners and Cliff Asness’s AQR Capital Management.

Because Old National Bancorp (NYSE:ONB) has faced bearish sentiment from the entirety of the hedge funds we track, it’s easy to see that there was a specific group of fund managers that decided to sell off their full holdings heading into Q3. Interestingly, Ken Grossman and Glen Schneider’s SG Capital Management said goodbye to the largest investment of the 700 funds watched by Insider Monkey, worth an estimated $11.7 million in stock, and Jim Simons’s Renaissance Technologies was right behind this move, as the fund sold off about $4.9 million worth. These bearish behaviors are intriguing to say the least, as aggregate hedge fund interest dropped by 2 funds heading into Q3.

As you can see these stocks had an average of 17.25 hedge funds with bullish positions and the average amount invested in these stocks was $267 million. That figure was $25 million in ONB’s case. Floor & Decor Holdings, Inc. (NYSE:FND) is the most popular stock in this table. On the other hand Colliers International Group Inc (NASDAQ:CIGI) is the least popular one with only 11 bullish hedge fund positions. Compared to these stocks Old National Bancorp (NYSE:ONB) is even less popular than CIGI. Considering that hedge funds aren’t fond of this stock in relation to other companies analyzed in this article, it may be a good idea to analyze it in detail and understand why the smart money isn’t behind this stock. This isn’t necessarily bad news. Although it is possible that hedge funds may think the stock is overpriced and view the stock as a short candidate, they may not be very familiar with the bullish thesis. In either case more research is warranted.