It was a rough fourth quarter for many hedge funds, which were naturally unable to overcome the big dip in the broad market, as the S&P 500 fell by about 7% during October and average hedge fund losing about 3%. The Russell 2000, composed of smaller companies, performed even worse, trailing the S&P by about 4 percentage points during the first half of Q4, as investors fled less-known quantities for safe havens. This was the case with hedge funds, who we heard were pulling money from the market amid the volatility, which included money from small-cap stocks, which they invest in at a higher rate than other investors. This action contributed to the greater decline in these stocks during the tumultuous period. We will study how this market volatility affected their sentiment towards Magnachip Semiconductor Corp (NYSE:MX) during the quarter below.

Magnachip Semiconductor Corp (NYSE:MX) has seen a decrease in activity from the world’s largest hedge funds in recent months. The company was not one of the 30 most popular stocks among hedge funds.

To most investors, hedge funds are assumed to be worthless, outdated investment tools of yesteryear. While there are over 8000 funds trading at present, We look at the moguls of this group, around 700 funds. It is estimated that this group of investors control the lion’s share of all hedge funds’ total asset base, and by tracking their inimitable stock picks, Insider Monkey has identified a number of investment strategies that have historically outrun Mr. Market. Insider Monkey’s flagship hedge fund strategy defeated the S&P 500 index by 6 percentage points per year since its inception in May 2014 through early November 2018. We were able to generate large returns even by identifying short candidates. Our portfolio of short stocks lost 26.1% since February 2017 even though the market was up nearly 19% during the same period. We just shared a list of 11 short targets in our latest quarterly update.

While collecting data on the company, we came across a letter from Dane Capital Management Fund, detailing its returns from the 4th quarter of 2017. Dane Capital has a position in the company. Here is what the fund had to say in the report:

“We remain optimistic about the opportunity for significant share appreciation — we were roughly even in 2017. The company has 5 OLED chips today, and multiple new wins. To put this in perspective, in 2016, this segment contributed roughly $160mn in sales with just a single AMOLED chip and dropped over 50% in 2017. The company has improved its mix in the foundry and in its power semiconductors and has guided that OLED will be at least $100mn in 2018. Amazingly, despite 3Q EPS of $0.28, or $1.12 annualized, the Street has modeled consensus EPS of $0.88 for 2018. We expect the number to be at least $1.40, which at a 15x multiple is $21 and at 20x is $28, or far more than a double. MagnaChip was recently at the Needham conference where they were very bullish, touching on OLED opportunities in automotive, the IoT, TVs and foldable phones. This strikes us as an early innings opportunity for a stock that is still widely ignored by the Street and could be dramatically higher in coming quarters.”

At Q3’s end, a total of 20 of the hedge funds tracked by Insider Monkey were bullish on this stock, a change of -17% from the previous quarter. The graph below displays the number of hedge funds with bullish position in MX over the last 13 quarters. With the smart money’s sentiment swirling, there exists a few key hedge fund managers who were increasing their stakes considerably (or already accumulated large positions). 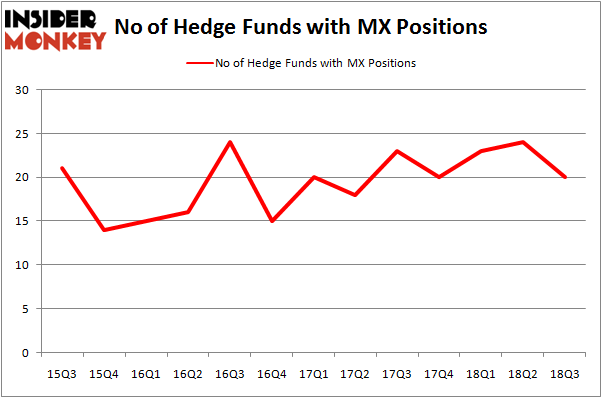 Since Magnachip Semiconductor Corp (NYSE:MX) has experienced a decline in interest from the smart money, we can see that there exists a select few funds who sold off their full holdings last quarter. Intriguingly, Spencer M. Waxman’s Shannon River Fund Management cut the biggest investment of the “upper crust” of funds followed by Insider Monkey, valued at an estimated $4 million in stock. Philippe Jabre’s fund, Jabre Capital Partners, also said goodbye to its stock, about $0.4 million worth. These moves are interesting, as total hedge fund interest dropped by 4 funds last quarter.

As you can see these stocks had an average of 2.3 hedge funds with bullish positions and the average amount invested in these stocks was $4 million. That figure was $151 million in MX’s case. Safety, Income & Growth Inc. (NYSE:SAFE) is the most popular stock in this table. On the other hand Oxford Lane Capital Corp. (NASDAQ:OXLC) is the least popular one with only 2 bullish hedge fund positions. Compared to these stocks Magnachip Semiconductor Corp (NYSE:MX) is more popular among hedge funds. Considering that hedge funds are fond of this stock in relation to its market cap peers, it may be a good idea to analyze it in detail and potentially include it in your portfolio.