Is Illinois Tool Works Inc. (NYSE:ITW) a good equity to bet on right now? We like to check what the smart money thinks first before doing extensive research. Although there have been several high profile failed hedge fund picks, the consensus picks among hedge fund investors have historically outperformed the market after adjusting for known risk attributes. It’s not surprising given that hedge funds have access to better information and more resources to find the latest market-moving information.

Is Illinois Tool Works Inc. (NYSE:ITW) a buy, sell, or hold? Money managers are in a pessimistic mood. The number of long hedge fund bets decreased by 2 in recent months. Our calculations also showed that itw isn’t among the 30 most popular stocks among hedge funds. ITW was in 26 hedge funds’ portfolios at the end of the third quarter of 2018. There were 28 hedge funds in our database with ITW positions at the end of the previous quarter.

At Q3’s end, a total of 26 of the hedge funds tracked by Insider Monkey were bullish on this stock, a change of -7% from one quarter earlier. On the other hand, there were a total of 38 hedge funds with a bullish position in ITW at the beginning of this year. With the smart money’s capital changing hands, there exists an “upper tier” of key hedge fund managers who were adding to their holdings significantly (or already accumulated large positions). 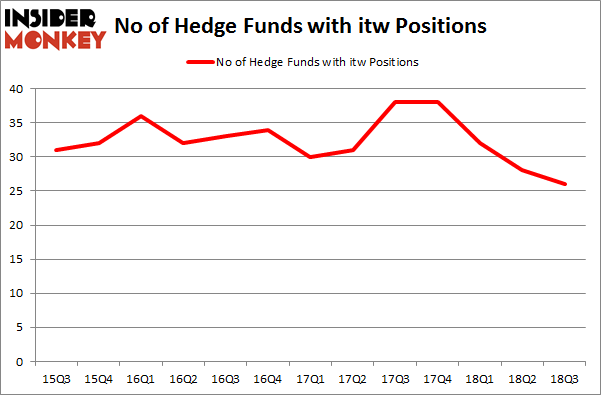 More specifically, Renaissance Technologies was the largest shareholder of Illinois Tool Works Inc. (NYSE:ITW), with a stake worth $95.8 million reported as of the end of September. Trailing Renaissance Technologies was Adage Capital Management, which amassed a stake valued at $86.3 million. Millennium Management, Ariel Investments, and AQR Capital Management were also very fond of the stock, giving the stock large weights in their portfolios.

Seeing as Illinois Tool Works Inc. (NYSE:ITW) has witnessed a decline in interest from hedge fund managers, it’s easy to see that there exists a select few funds that decided to sell off their positions entirely heading into Q3. Intriguingly, Clint Carlson’s Carlson Capital cut the largest investment of the “upper crust” of funds monitored by Insider Monkey, worth an estimated $24.2 million in call options. Israel Englander’s fund, Millennium Management, also dropped its call options, about $13.9 million worth. These moves are intriguing to say the least, as total hedge fund interest dropped by 2 funds heading into Q3.

As you can see these stocks had an average of 39.75 hedge funds with bullish positions and the average amount invested in these stocks was $1.82 billion. That figure was $511 million in ITW’s case. Humana Inc (NYSE:HUM) is the most popular stock in this table. On the other hand Carnival Corporation (NYSE:CCL) is the least popular one with only 36 bullish hedge fund positions. Compared to these stocks Illinois Tool Works Inc. (NYSE:ITW) is even less popular than CCL. Considering that hedge funds aren’t fond of this stock in relation to other companies analyzed in this article, it may be a good idea to analyze it in detail and understand why the smart money isn’t behind this stock. This isn’t necessarily bad news. Although it is possible that hedge funds may think the stock is overpriced and view the stock as a short candidate, they may not be very familiar with the bullish thesis. In either case more research is warranted.