Is HealthStream, Inc. (NASDAQ:HSTM) a buy here? Investors who are in the know are getting less optimistic. The number of long hedge fund positions went down by 4 lately. Our calculations also showed that HSTM isn’t among the 30 most popular stocks among hedge funds. HSTM was in 11 hedge funds’ portfolios at the end of the third quarter of 2018. There were 15 hedge funds in our database with HSTM holdings at the end of the previous quarter. 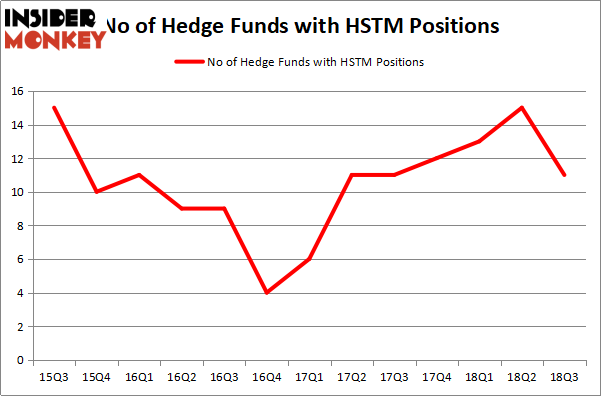 Of the funds tracked by Insider Monkey, Renaissance Technologies, managed by Jim Simons, holds the number one position in HealthStream, Inc. (NASDAQ:HSTM). Renaissance Technologies has a $10.2 million position in the stock, comprising less than 0.1%% of its 13F portfolio. Coming in second is D E Shaw, managed by D. E. Shaw, which holds a $8.3 million position; less than 0.1%% of its 13F portfolio is allocated to the stock. Some other professional money managers that are bullish encompass Paul Hondros’s AlphaOne Capital Partners, Noam Gottesman’s GLG Partners and Peter Rathjens, Bruce Clarke and John Campbell’s Arrowstreet Capital.

Since HealthStream, Inc. (NASDAQ:HSTM) has faced declining sentiment from the entirety of the hedge funds we track, it’s easy to see that there is a sect of hedgies who were dropping their positions entirely last quarter. It’s worth mentioning that Michael Platt and William Reeves’s BlueCrest Capital Mgmt. dropped the largest position of all the hedgies followed by Insider Monkey, comprising an estimated $0.4 million in stock, and Matthew Tewksbury’s Stevens Capital Management was right behind this move, as the fund dropped about $0.3 million worth. These moves are interesting, as aggregate hedge fund interest dropped by 4 funds last quarter.

As you can see these stocks had an average of 15.5 hedge funds with bullish positions and the average amount invested in these stocks was $142 million. That figure was $47 million in HSTM’s case. NCI Building Systems, Inc. (NYSE:NCS) is the most popular stock in this table. On the other hand Triumph Bancorp Inc (NASDAQ:TBK) is the least popular one with only 7 bullish hedge fund positions. HealthStream, Inc. (NASDAQ:HSTM) is not the least popular stock in this group but hedge fund interest is still below average. This is a slightly negative signal and we’d rather spend our time researching stocks that hedge funds are piling on. In this regard NCS might be a better candidate to consider a long position.