Formula One Group (NASDAQ:FWONA) investors should be aware of a decrease in activity from the world’s largest hedge funds recently. Our calculations also showed that FWONA isn’t among the 30 most popular stocks among hedge funds.

What does the smart money think about Formula One Group (NASDAQ:FWONA)?

Heading into the fourth quarter of 2018, a total of 21 of the hedge funds tracked by Insider Monkey held long positions in this stock, a change of -9% from the previous quarter. By comparison, 26 hedge funds held shares or bullish call options in FWONA heading into this year. With hedgies’ sentiment swirling, there exists an “upper tier” of key hedge fund managers who were increasing their holdings meaningfully (or already accumulated large positions). 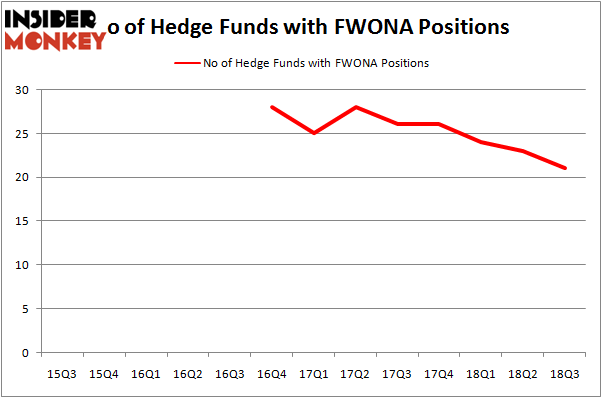 The largest stake in Formula One Group (NASDAQ:FWONA) was held by Southeastern Asset Management, which reported holding $83.4 million worth of stock at the end of September. It was followed by Ancient Art (Teton Capital) with a $69.8 million position. Other investors bullish on the company included Odey Asset Management Group, CQS Cayman LP, and Ashe Capital.

Judging by the fact that Formula One Group (NASDAQ:FWONA) has experienced bearish sentiment from hedge fund managers, we can see that there was a specific group of money managers that decided to sell off their positions entirely in the third quarter. Intriguingly, Ryan Frick and Oliver Evans’s Dorsal Capital Management dropped the biggest stake of all the hedgies followed by Insider Monkey, totaling an estimated $21.2 million in stock, and Philippe Jabre’s Jabre Capital Partners was right behind this move, as the fund dumped about $1.4 million worth. These transactions are important to note, as total hedge fund interest fell by 2 funds in the third quarter.

As you can see these stocks had an average of 17.75 hedge funds with bullish positions and the average amount invested in these stocks was $558 million. That figure was $310 million in FWONA’s case. Unum Group (NYSE:UNM) is the most popular stock in this table. On the other hand Gol Linhas Aereas Inteligentes SA (NYSE:GOL) is the least popular one with only 4 bullish hedge fund positions. Formula One Group (NASDAQ:FWONA) is not the most popular stock in this group but hedge fund interest is still above average. This is a slightly positive signal but we’d rather spend our time researching stocks that hedge funds are piling on. In this regard UNM might be a better candidate to consider a long position.