The latest 13F reporting period has come and gone, and Insider Monkey is again at the forefront when it comes to making use of this gold mine of data. We have processed the filings of the more than 700 world-class investment firms that we track and now have access to the collective wisdom contained in these filings, which are based on their September 30 holdings, data that is available nowhere else. Should you consider Exterran Corporation (NYSE:EXTN) for your portfolio? We’ll look to this invaluable collective wisdom for the answer.

Is Exterran Corporation (NYSE:EXTN) a great investment today? The best stock pickers are in a bearish mood. The number of bullish hedge fund bets retreated by 1 lately. Our calculations also showed that extn isn’t among the 30 most popular stocks among hedge funds. EXTN was in 19 hedge funds’ portfolios at the end of the third quarter of 2018. There were 20 hedge funds in our database with EXTN holdings at the end of the previous quarter. 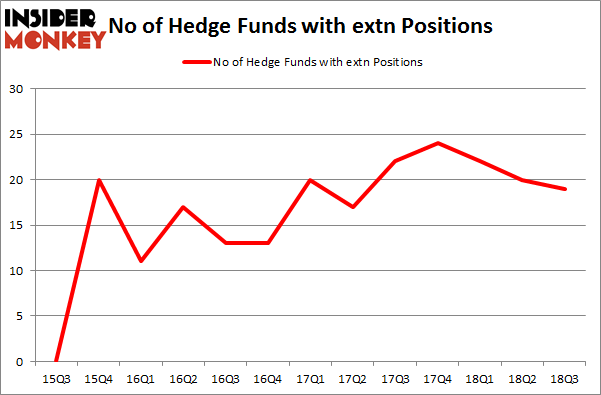 More specifically, Magnetar Capital was the largest shareholder of Exterran Corporation (NYSE:EXTN), with a stake worth $58.1 million reported as of the end of September. Trailing Magnetar Capital was Cannell Capital, which amassed a stake valued at $15.6 million. Carlson Capital, Millennium Management, and Renaissance Technologies were also very fond of the stock, giving the stock large weights in their portfolios.

Seeing as Exterran Corporation (NYSE:EXTN) has experienced a decline in interest from the aggregate hedge fund industry, it’s safe to say that there was a specific group of hedge funds that elected to cut their entire stakes by the end of the third quarter. It’s worth mentioning that Joel Greenblatt’s Gotham Asset Management cut the largest position of all the hedgies followed by Insider Monkey, valued at close to $1.7 million in stock, and Benjamin A. Smith’s Laurion Capital Management was right behind this move, as the fund cut about $0.5 million worth. These bearish behaviors are intriguing to say the least, as total hedge fund interest fell by 1 funds by the end of the third quarter.

As you can see these stocks had an average of 10 hedge funds with bullish positions and the average amount invested in these stocks was $75 million. That figure was $118 million in EXTN’s case. Venator Materials PLC (NYSE:VNTR) is the most popular stock in this table. On the other hand Nuveen Preferred Income Opportunities Fund (NYSE:JPC) is the least popular one with only 2 bullish hedge fund positions. Exterran Corporation (NYSE:EXTN) is not the most popular stock in this group but hedge fund interest is still above average. This is a slightly positive signal but we’d rather spend our time researching stocks that hedge funds are piling on. In this regard VNTR might be a better candidate to consider a long position.