eBay Inc (NASDAQ:EBAY) has experienced a decrease in enthusiasm from smart money in recent months. At the end of the third quarter there were 44 smart money investors from our database with long positions in the company, which is down by one from the previous quarter. Not only that the company is slowly losing some of its holders, it is far for being the favorite one among the wealthiest investors. (If you are interested to see which stocks the richest hedge fund managers are piling on, take a look at the list of 30 stocks billionaires are crazy about: Insider Monkey billionaire stock index.) Still, we are interested to take another look at the company, and to determine if the stock is worth buying by analyzing more data about it.

In the 21st century investor’s toolkit there are a lot of formulas shareholders put to use to assess their stock investments. A pair of the less utilized formulas are hedge fund and insider trading sentiment. We have shown that, historically, those who follow the best picks of the top investment managers can outpace the market by a significant amount (see the details here).

While searching for more information on eBay Inc, we stumbled upon River Park Large Growth Fund’s Third Quarter 2018 Performance Summary, in which it reviews the company’s recent performance. Here is that part of the report:

“eBay: Due to mixed second quarter results and soft forward guidance, EBAY shares were also a top detractor for the quarter. Although the company reported a solid quarter of 7% Gross Merchandise Value (GMV) growth (in-line with expectations and the prior three quarters), 9% revenue growth and 17% EPS growth, the company modestly reduced its full-year revenue guidance (to 6%-7% organic growth) and cautioned that continued investments and a less favorable currency environment could pressure the next several quarters.

While we continue to believe that eBay is a valuable franchise and has a unique opportunity to reaccelerate its growth, we have been disappointed that the pace of change has not been faster over the last few quarters. Although the valuation remains extremely compelling (13x EPS), we would like to see a more significant return of momentum to the company’s business before becoming more constructive on its shares.”

We won’t make our conclusion about the stock based only on this data, instead we’ll take all into account and continue with our analysis. Now, we’ll take a look at the latest hedge fund action regarding eBay Inc (NASDAQ:EBAY).

What does the smart money think about eBay Inc (NASDAQ:EBAY)?

At Q3’s end, a total of 44 of the hedge funds tracked by Insider Monkey held long positions in this stock, a change of -2% from the second quarter of 2018. Below, you can check out the change in hedge fund sentiment towards EBAY over the last 13 quarters. With hedgies’ sentiment swirling, there exists a few key hedge fund managers who were increasing their holdings significantly (or already accumulated large positions). 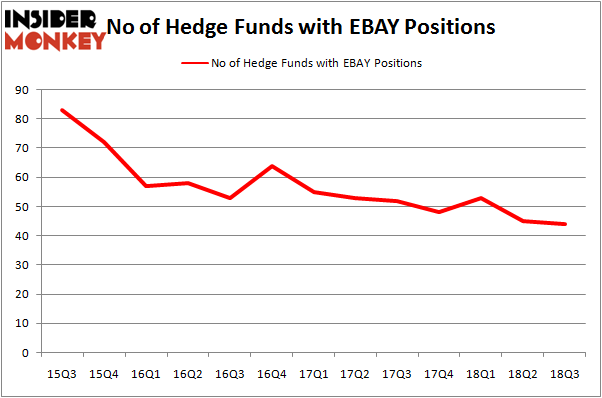 The largest stake in eBay Inc (NASDAQ:EBAY) was held by AQR Capital Management, which reported holding $480.8 million worth of stock at the end of September. It was followed by Glenview Capital with a $382.3 million position. Other investors bullish on the company included D E Shaw, GLG Partners, and Kensico Capital.

Seeing as eBay Inc (NASDAQ:EBAY) has faced bearish sentiment from the smart money, it’s easy to see that there lies a certain “tier” of money managers that slashed their positions entirely heading into Q3. Interestingly, Peter Rathjens, Bruce Clarke and John Campbell’s Arrowstreet Capital said goodbye to the largest stake of the 700 funds monitored by Insider Monkey, valued at close to $162.7 million in stock, and Jim Simons’s Renaissance Technologies was right behind this move, as the fund said goodbye to about $42.3 million worth. These moves are important to note, as aggregate hedge fund interest was cut by 1 funds heading into Q3.

As you can see these stocks had an average of 35 hedge funds with bullish positions and the average amount invested in these stocks was almost $2 billion. That figure was $2.28 billion in EBAY’s case. Spotify Technology S.A. (NYSE:SPOT) is the most popular stock in this table. On the other hand Johnson Controls International plc (NYSE:JCI) is the least popular one with only 16 bullish hedge fund positions. eBay Inc (NASDAQ:EBAY) is not the most popular stock in this group but hedge fund interest is still above average. This is a slightly positive signal but we’d rather spend our time researching stocks that hedge funds are piling on. In this regard SPOT might be a better candidate to consider a long position.