A market correction in the fourth quarter, spurred by a number of global macroeconomic concerns and rising interest rates ended up having a negative impact on the markets and many hedge funds as a result. The stocks of smaller companies were especially hard hit during this time as investors fled to investments seen as being safer. This is evident in the fact that the Russell 2000 ETF underperformed the S&P 500 ETF by 4 percentage points during the first half of the fourth quarter. We also received indications that hedge funds were trimming their positions amid the market volatility and uncertainty, and given their greater inclination towards smaller cap stocks than other investors, it follows that a stronger sell-off occurred in those stocks. Let’s study the hedge fund sentiment to see how those concerns affected their ownership of Daseke, Inc. (NASDAQ:DSKE) during the quarter.

Daseke, Inc. (NASDAQ:DSKE) has experienced a decrease in enthusiasm from smart money recently. The company wasn’t one of the 30 most popular stocks among hedge funds.

In the eyes of most shareholders, hedge funds are viewed as worthless, old financial vehicles of yesteryear. While there are over 8000 funds in operation at the moment, Our experts hone in on the moguls of this club, approximately 700 funds. These money managers preside over bulk of the smart money’s total capital, and by keeping an eye on their highest performing stock picks, Insider Monkey has deciphered several investment strategies that have historically outperformed the broader indices. Insider Monkey’s flagship hedge fund strategy surpassed the S&P 500 index by 6 percentage points annually since its inception in May 2014 through early November 2018. We were able to generate large returns even by identifying short candidates. Our portfolio of short stocks lost 26.1% since February 2017 even though the market was up nearly 19% during the same period. We just shared a list of 11 short targets in our latest quarterly update.

While collecting data on the company, we came across a letter from Dane Capital Management Fund, detailing its returns from the 4th quarter of 2017. Dane Capital has a small position in Daseke, Inc. (NASDAQ:DSKE). Here is what the fund had to say in the report:

“Daseke is the former Hennessy 2 SPAC and performed extremely well in 2017. It is a top 3-position for Dane and we own both shares and warrants. The warrants returned about 160% (we added in early January when it was clear that the transaction was fully backstopped) and the stock returned over 40%, although we added when shares fell, resulting in an approximate 50% return. With the stock still 2-3 EBITDA turns below our view of fair value, and as the largest player in the flatbed trucking industry, but with just 1% market share, we believe the runway for sustainable growth and compounding is massive. We also appreciate the management alignment, with Chairman and CEO Don Daseke, who owns almost 40% of the company, with 2 years remaining on his lock-up.”

How have hedgies been trading Daseke, Inc. (NASDAQ:DSKE)?

Heading into the fourth quarter of 2018, a total of 12 of the hedge funds tracked by Insider Monkey held long positions in this stock, a change of -20% from the previous quarter. Below, you can check out the change in hedge fund sentiment towards DSKE over the last 13 quarters. So, let’s find out which hedge funds were among the top holders of the stock and which hedge funds were making big moves. 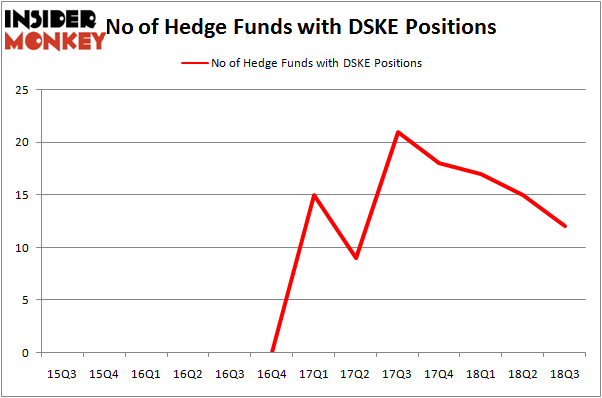 According to publicly available hedge fund and institutional investor holdings data compiled by Insider Monkey, George McCabe’s Portolan Capital Management has the number one position in Daseke, Inc. (NASDAQ:DSKE), worth close to $10.2 million, amounting to 1% of its total 13F portfolio. Coming in second is GLG Partners, led by Noam Gottesman, holding a $10 million position; the fund has less than 0.1%% of its 13F portfolio invested in the stock. Remaining members of the smart money that are bullish encompass Israel Englander’s Millennium Management, Michael A. Price and Amos Meron’s Empyrean Capital Partners and Ken Griffin’s Citadel Investment Group.

Due to the fact that Daseke, Inc. (NASDAQ:DSKE) has experienced declining sentiment from hedge fund managers, it’s safe to say that there lies a certain “tier” of fund managers that slashed their entire stakes by the end of the third quarter. Intriguingly, Mike Vranos’s Ellington dropped the largest stake of all the hedgies watched by Insider Monkey, comprising close to $0.4 million in stock, and Peter Muller’s PDT Partners was right behind this move, as the fund cut about $0.4 million worth. These transactions are interesting, as total hedge fund interest fell by 3 funds by the end of the third quarter.

As you can see these stocks had an average of 10.5 hedge funds with bullish positions and the average amount invested in these stocks was $52 million. That figure was $32 million in DSKE’s case. Stemline Therapeutics Inc (NASDAQ:STML) is the most popular stock in this table. On the other hand Blackrock MuniHoldings Californ (NYSE:MUC) is the least popular one with only 1 bullish hedge fund positions. Daseke, Inc. (NASDAQ:DSKE) is not the most popular stock in this group but hedge fund interest is still above average. This is a slightly positive signal but we’d rather spend our time researching stocks that hedge funds are piling on. In this regard STML might be a better candidate to consider a long position.