The latest 13F reporting period has come and gone, and Insider Monkey is again at the forefront when it comes to making use of this gold mine of data. Insider Monkey finished processing 821 13F filings submitted by hedge funds and prominent investors. These filings show these funds’ portfolio positions as of March 31st, 2020. What do these smart investors think about CURO Group Holdings Corp. (NYSE:CURO)?

Is CURO Group Holdings Corp. (NYSE:CURO) a bargain? Investors who are in the know are reducing their bets on the stock. The number of bullish hedge fund bets went down by 4 recently. Our calculations also showed that CURO isn’t among the 30 most popular stocks among hedge funds (click for Q1 rankings and see the video for a quick look at the top 5 stocks).

At Insider Monkey we scour multiple sources to uncover the next great investment idea. For example, blockchain technology’s influence will go beyond online payments. So, we are checking out this futurist’s moonshot opportunities in tech stocks. We interview hedge fund managers and ask them about their best ideas. We read hedge fund investor letters and listen to stock pitches at hedge fund conferences. For example we are checking out stocks recommended/scorned by legendary Bill Miller. Our best call in 2020 was shorting the market when the S&P 500 was trading at 3150 in February after realizing the coronavirus pandemic’s significance before most investors. Keeping this in mind let’s analyze the key hedge fund action encompassing CURO Group Holdings Corp. (NYSE:CURO).

At Q1’s end, a total of 14 of the hedge funds tracked by Insider Monkey held long positions in this stock, a change of -22% from the fourth quarter of 2019. The graph below displays the number of hedge funds with bullish position in CURO over the last 18 quarters. With hedgies’ positions undergoing their usual ebb and flow, there exists a select group of notable hedge fund managers who were upping their holdings considerably (or already accumulated large positions). 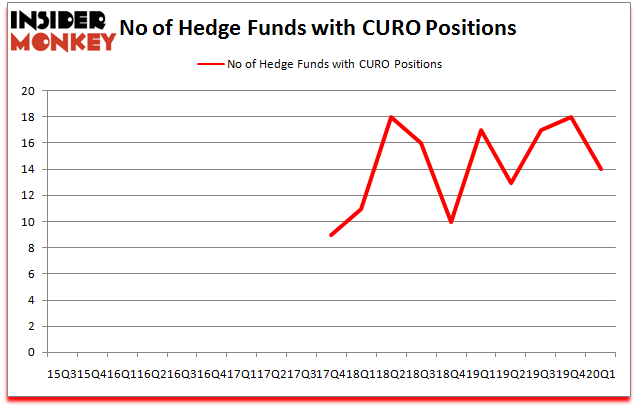 More specifically, Empyrean Capital Partners was the largest shareholder of CURO Group Holdings Corp. (NYSE:CURO), with a stake worth $8.9 million reported as of the end of September. Trailing Empyrean Capital Partners was Second Curve Capital, which amassed a stake valued at $4.4 million. Glendon Capital Management, Millennium Management, and D E Shaw were also very fond of the stock, becoming one of the largest hedge fund holders of the company. In terms of the portfolio weights assigned to each position Second Curve Capital allocated the biggest weight to CURO Group Holdings Corp. (NYSE:CURO), around 36.36% of its 13F portfolio. Glendon Capital Management is also relatively very bullish on the stock, setting aside 0.87 percent of its 13F equity portfolio to CURO.

Judging by the fact that CURO Group Holdings Corp. (NYSE:CURO) has experienced a decline in interest from the aggregate hedge fund industry, it’s safe to say that there lies a certain “tier” of hedge funds who were dropping their entire stakes by the end of the first quarter. Intriguingly, Jonathan Barrett and Paul Segal’s Luminus Management said goodbye to the largest investment of the “upper crust” of funds monitored by Insider Monkey, comprising about $10.1 million in stock. Simon Sadler’s fund, Segantii Capital, also said goodbye to its stock, about $1.2 million worth. These bearish behaviors are important to note, as total hedge fund interest was cut by 4 funds by the end of the first quarter.

As you can see these stocks had an average of 8.5 hedge funds with bullish positions and the average amount invested in these stocks was $13 million. That figure was $25 million in CURO’s case. Franklin Covey Co. (NYSE:FC) is the most popular stock in this table. On the other hand Ideanomics, Inc. (NASDAQ:IDEX) is the least popular one with only 3 bullish hedge fund positions. Compared to these stocks CURO Group Holdings Corp. (NYSE:CURO) is more popular among hedge funds. Our calculations showed that top 10 most popular stocks among hedge funds returned 41.4% in 2019 and outperformed the S&P 500 ETF (SPY) by 10.1 percentage points. These stocks returned 13.3% in 2020 through June 25th but still managed to beat the market by 16.8 percentage points. Hedge funds were also right about betting on CURO as the stock returned 54.4% so far in Q2 (through June 25th) and outperformed the market by an even larger margin. Hedge funds were clearly right about piling into this stock relative to other stocks with similar market capitalizations.