Is China Unicom (Hong Kong) Limited (NYSE:CHU) a worthy investment now? The best stock pickers are taking a pessimistic view. The number of bullish hedge fund positions fell by 3 recently. Our calculations also showed that CHU isn’t among the 30 most popular stocks among hedge funds. 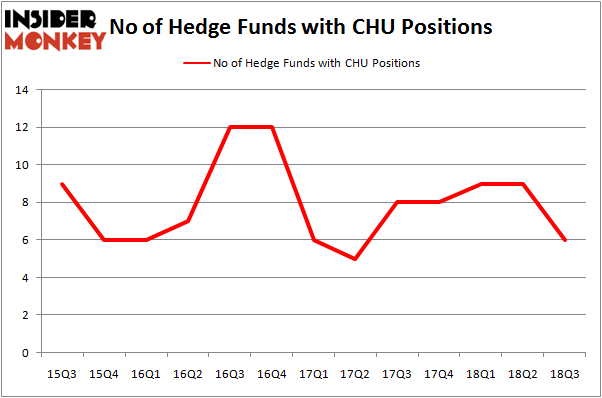 According to publicly available hedge fund and institutional investor holdings data compiled by Insider Monkey, Jim Simons’s Renaissance Technologies has the most valuable position in China Unicom (Hong Kong) Limited (NYSE:CHU), worth close to $27.3 million, amounting to less than 0.1%% of its total 13F portfolio. Coming in second is Arrowstreet Capital, led by Peter Rathjens, Bruce Clarke and John Campbell, holding a $19.8 million position; less than 0.1%% of its 13F portfolio is allocated to the company. Some other professional money managers that are bullish consist of Israel Englander’s Millennium Management, Michael Platt and William Reeves’s BlueCrest Capital Mgmt. and John Overdeck and David Siegel’s Two Sigma Advisors.

Since China Unicom (Hong Kong) Limited (NYSE:CHU) has experienced declining sentiment from the smart money, it’s easy to see that there was a specific group of funds that elected to cut their full holdings in the third quarter. At the top of the heap, Charles Clough’s Clough Capital Partners said goodbye to the biggest stake of the “upper crust” of funds watched by Insider Monkey, worth about $0.8 million in stock, and Matthew Hulsizer’s PEAK6 Capital Management was right behind this move, as the fund dropped about $0.2 million worth. These bearish behaviors are intriguing to say the least, as aggregate hedge fund interest fell by 3 funds in the third quarter.

As you can see these stocks had an average of 26.5 hedge funds with bullish positions and the average amount invested in these stocks was $559 million. That figure was $54 million in CHU’s case. Halliburton Company (NYSE:HAL) is the most popular stock in this table. On the other hand National Grid plc (NYSE:NGG) is the least popular one with only 11 bullish hedge fund positions. Compared to these stocks China Unicom (Hong Kong) Limited (NYSE:CHU) is even less popular than NGG. Considering that hedge funds aren’t fond of this stock in relation to other companies analyzed in this article, it may be a good idea to analyze it in detail and understand why the smart money isn’t behind this stock. This isn’t necessarily bad news. Although it is possible that hedge funds may think the stock is overpriced and view the stock as a short candidate, they may not be very familiar with the bullish thesis. In either case more research is warranted.

Hedge Funds Are Selling MSC Industrial Direct Co Inc (MSM)
Monthly Newsletter Strategy
Download a free copy of our newsletter and see the details inside!
Hedge Fund Resource Center
Related News
Should You Buy China Unicom (Hong Kong) Limited (ADR) (CHU)? 11 Most Expensive Countries in Asia 25 Countries That Spend The Most On Food: US Isn’t One Of ‘Em 20 Most Expensive Cities to Live in The World in 2015 11 Most Expensive Countries to Buy Milk 11 Countries with Highest Atheist Population Top 10 Countries With The Most Billionaires Per Capita 11 Countries With The Worst Modern Music In The World The Top 5 Robo Advisor Apps of 2018 Five Reasons You Need a Day-Trading Mentor
Billionaire Hedge Funds