Hedge Funds Are Selling Bank of the Ozarks (OZK)

Hedge funds and large money managers usually invest with a focus on the long-term horizon and, therefore, short-lived dips on the charts, usually don’t make them change their opinion towards a company. This time it may be different. During the first 6 weeks of the fourth quarter we observed increased volatility and small-cap stocks underperformed the market. Hedge fund investor letters indicated that they are cutting their overall exposure, closing out some position and doubling down on others. Let’s take a look at the hedge fund sentiment towards Bank of the Ozarks (NASDAQ:OZK) to find out whether it was one of their high conviction long-term ideas.

Is Bank of the Ozarks (NASDAQ:OZK) an excellent investment today? The best stock pickers are reducing their bets on the stock. The number of bullish hedge fund positions were trimmed by 5 in recent months. Our calculations also showed that OZK isn’t among the 30 most popular stocks among hedge funds.

We’re going to take a look at the latest hedge fund action encompassing Bank of the Ozarks (NASDAQ:OZK).

Hedge fund activity in Bank of the Ozarks (NASDAQ:OZK)

Heading into the fourth quarter of 2018, a total of 10 of the hedge funds tracked by Insider Monkey held long positions in this stock, a change of -33% from one quarter earlier. Below, you can check out the change in hedge fund sentiment towards OZK over the last 13 quarters. So, let’s see which hedge funds were among the top holders of the stock and which hedge funds were making big moves. 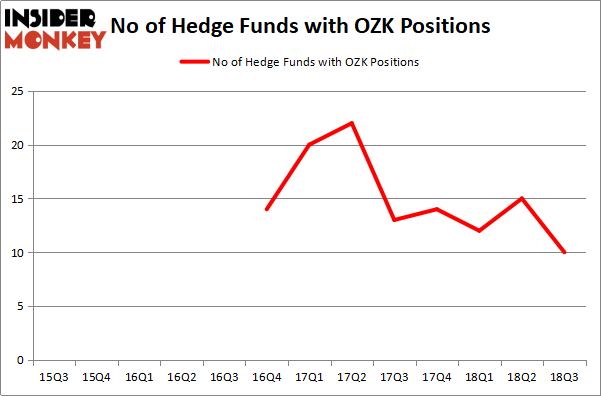 The largest stake in Bank of the Ozarks (NASDAQ:OZK) was held by Diamond Hill Capital, which reported holding $112.6 million worth of stock at the end of September. It was followed by Giverny Capital with a $51.1 million position. Other investors bullish on the company included Sirios Capital Management, Royce & Associates, and Skylands Capital.

Seeing as Bank of the Ozarks (NASDAQ:OZK) has experienced bearish sentiment from the entirety of the hedge funds we track, logic holds that there is a sect of funds that elected to cut their full holdings heading into Q3. At the top of the heap, Ric Dillon’s Diamond Hill Capital sold off the largest investment of the 700 funds watched by Insider Monkey, worth about $100.8 million in stock, and Cliff Asness’s AQR Capital Management was right behind this move, as the fund cut about $7.8 million worth. These bearish behaviors are interesting, as total hedge fund interest dropped by 5 funds heading into Q3.

Let’s go over hedge fund activity in other stocks – not necessarily in the same industry as Bank of the Ozarks (NASDAQ:OZK) but similarly valued. We will take a look at GW Pharmaceuticals plc (NASDAQ:GWPH), Zscaler, Inc. (NASDAQ:ZS), Toll Brothers Inc (NYSE:TOL), and NovoCure Limited (NASDAQ:NVCR). This group of stocks’ market valuations are similar to OZK’s market valuation.

As you can see these stocks had an average of 24.5 hedge funds with bullish positions and the average amount invested in these stocks was $402 million. That figure was $184 million in OZK’s case. Toll Brothers Inc (NYSE:TOL) is the most popular stock in this table. On the other hand GW Pharmaceuticals plc (NASDAQ:GWPH) is the least popular one with only 18 bullish hedge fund positions. Compared to these stocks Bank of the Ozarks (NASDAQ:OZK) is even less popular than GWPH. Considering that hedge funds aren’t fond of this stock in relation to other companies analyzed in this article, it may be a good idea to analyze it in detail and understand why the smart money isn’t behind this stock. This isn’t necessarily bad news. Although it is possible that hedge funds may think the stock is overpriced and view the stock as a short candidate, they may not be very familiar with the bullish thesis. In either case more research is warranted.