Legendary investors such as Leon Cooperman and Ken Griffin earn enormous amounts of money for themselves and their investors by doing in-depth research on small-cap stocks that big brokerage houses don’t publish. Small-cap stocks, especially when they are screened well, can generate substantial outperformance versus a boring index fund. That’s why we analyze the activity of those elite funds in small-cap stocks. In the following paragraphs, we analyze Devon Energy Corp (NYSE:DVN) from the collective perspective of those top money managers.

After suffering a loss of hedge fund support in Q1, Devon Energy was a popular target of money managers in Q2, who poured back into the stock. 46 funds tracked by our database owned a collective 9.3% of Devon’s shares, and included the likes of Paul Singer’s Elliott Management (3.02 million shares) and Ken Griffin’s Citadel Investment (7.48 million shares), the latter of which increased the size of its position by 1,107% in the second quarter. Devon Energy also cracked our list of the 25 Stocks Billionaires Are Piling On, ranking 24th. Devon’s Q3 EPS of $0.63 crushed the consensus estimate by over 50%, partly on the strength of Devon’s aggressive share repurchasing efforts. The company has bought back $2.7 billion worth of shares in 2018, or 13% of its float.

To most investors, hedge funds are seen as underperforming, old investment vehicles of the past. While there are more than 8,000 funds in operation at present, our experts look at the masters of this club, around 700 funds. Most estimates calculate that this group of people orchestrate the lion’s share of all hedge funds’ total capital, and by shadowing their finest stock picks, Insider Monkey has brought to light numerous investment strategies that have historically outrun the broader indices. Insider Monkey’s small-cap hedge fund strategy outperformed the S&P 500 index by 12 percentage points per year for a decade in their back tests (see the details here).

What does the smart money think about Devon Energy Corp (NYSE:DVN)? 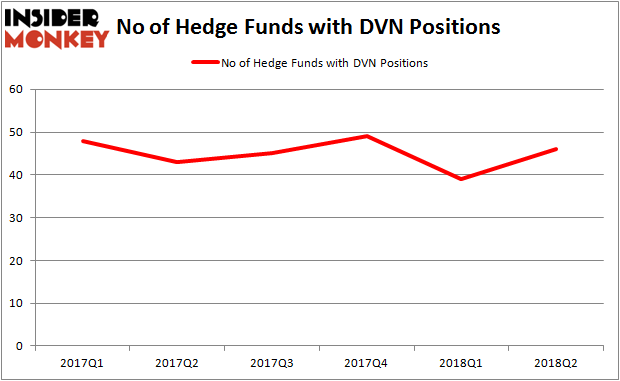 Among these funds, Diamond Hill Capital held the most valuable stake in Devon Energy Corp (NYSE:DVN), which was worth $404.5 million at the end of the second quarter. On the second spot was Ken Griffin’s Citadel Investment Group, which had amassed $328.9 million worth of shares as of June 30. Moreover, Elm Ridge Capital, SIR Capital Management, and Castle Hook Partners were also bullish on Devon Energy Corp (NYSE:DVN), allocating a large percentage of their portfolios to this stock.

As you can see these stocks had an average of 26 hedge funds with bullish positions and the average amount invested in these stocks was $854 million. That figure was $2.13 billion in DVN’s case. DXC Technology Company (NYSE:DXC) is the most popular stock in this table. On the other hand Sasol Limited (ADR) (NYSE:SSL) is the least popular one with only 6 bullish hedge fund positions. Devon Energy Corp (NYSE:DVN) is not the most popular stock in this group but hedge fund interest is still high, and billionaires also love it (and DXC). Thus, either of those two stocks might be a good candidate to consider a long position in.