Out of thousands of stocks that are currently traded on the market, it is difficult to identify those that will really generate strong returns. Hedge funds and institutional investors spend millions of dollars on analysts with MBAs and PhDs, who are industry experts and well connected to other industry and media insiders on top of that. Individual investors can piggyback the hedge funds employing these talents and can benefit from their vast resources and knowledge in that way. We analyze quarterly 13F filings of nearly 900 hedge funds and, by looking at the smart money sentiment that surrounds a stock, we can determine whether it has the potential to beat the market over the long-term. Therefore, let’s take a closer look at what smart money thinks about Mueller Industries, Inc. (NYSE:MLI).

Is Mueller Industries, Inc. (NYSE:MLI) a superb investment now? Investors who are in the know were buying. The number of long hedge fund positions rose by 1 lately. Mueller Industries, Inc. (NYSE:MLI) was in 20 hedge funds’ portfolios at the end of the first quarter of 2021. The all time high for this statistic is 21. Our calculations also showed that MLI isn’t among the 30 most popular stocks among hedge funds (click for Q1 rankings). There were 19 hedge funds in our database with MLI holdings at the end of December.

At Insider Monkey, we scour multiple sources to uncover the next great investment idea. For example, pet market is growing at a 7% annual rate and is expected to reach $110 billion in 2021. So, we are checking out the 5 best stocks for animal lovers. We go through lists like the 15 best Jim Cramer stocks to identify the next Tesla that will deliver outsized returns. Even though we recommend positions in only a tiny fraction of the companies we analyze, we check out as many stocks as we can. We read hedge fund investor letters and listen to stock pitches at hedge fund conferences. You can subscribe to our free daily newsletter on our homepage. Keeping this in mind let’s review the fresh hedge fund action encompassing Mueller Industries, Inc. (NYSE:MLI).

Do Hedge Funds Think MLI Is A Good Stock To Buy Now? 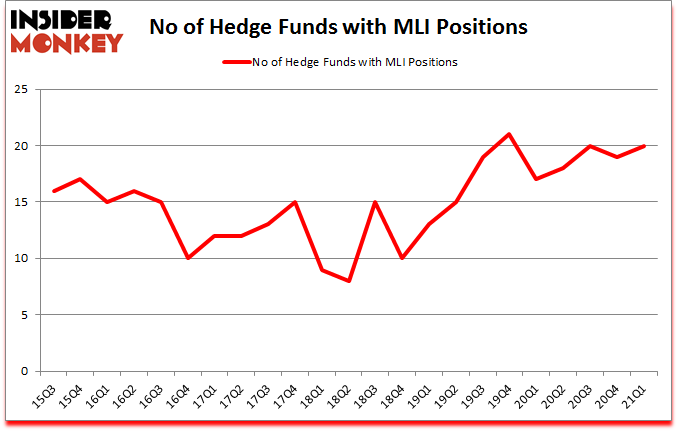 According to Insider Monkey’s hedge fund database, GAMCO Investors, managed by Mario Gabelli, holds the biggest position in Mueller Industries, Inc. (NYSE:MLI). GAMCO Investors has a $132.5 million position in the stock, comprising 1.2% of its 13F portfolio. Coming in second is Royce & Associates, managed by Chuck Royce, which holds a $38.6 million position; 0.3% of its 13F portfolio is allocated to the stock. Remaining hedge funds and institutional investors that are bullish include Jeffrey Gates’s Gates Capital Management, Peter Rathjens, Bruce Clarke and John Campbell’s Arrowstreet Capital and John Smith Clark’s Southpoint Capital Advisors. In terms of the portfolio weights assigned to each position AltraVue Capital allocated the biggest weight to Mueller Industries, Inc. (NYSE:MLI), around 1.76% of its 13F portfolio. GAMCO Investors is also relatively very bullish on the stock, setting aside 1.16 percent of its 13F equity portfolio to MLI.

As industrywide interest jumped, key hedge funds were leading the bulls’ herd. Renaissance Technologies, assembled the most valuable position in Mueller Industries, Inc. (NYSE:MLI). Renaissance Technologies had $1.8 million invested in the company at the end of the quarter. Donald Sussman’s Paloma Partners also made a $0.5 million investment in the stock during the quarter. The other funds with new positions in the stock are Greg Eisner’s Engineers Gate Manager and Louis Navellier’s Navellier & Associates.

As you can see these stocks had an average of 17.1 hedge funds with bullish positions and the average amount invested in these stocks was $170 million. That figure was $250 million in MLI’s case. Avaya Holdings Corp. (NYSE:AVYA) is the most popular stock in this table. On the other hand Helios Technologies, Inc. (NASDAQ:HLIO) is the least popular one with only 7 bullish hedge fund positions. Mueller Industries, Inc. (NYSE:MLI) is not the most popular stock in this group but hedge fund interest is still above average. Our overall hedge fund sentiment score for MLI is 56.2. Stocks with higher number of hedge fund positions relative to other stocks as well as relative to their historical range receive a higher sentiment score. This is a slightly positive signal but we’d rather spend our time researching stocks that hedge funds are piling on. Our calculations showed that top 5 most popular stocks among hedge funds returned 95.8% in 2019 and 2020, and outperformed the S&P 500 ETF (SPY) by 40 percentage points. These stocks gained 23.8% in 2021 through July 16th and beat the market again by 7.7 percentage points. Unfortunately MLI wasn’t nearly as popular as these 5 stocks and hedge funds that were betting on MLI were disappointed as the stock returned -1.9% since the end of March (through 7/16) and underperformed the market. If you are interested in investing in large cap stocks with huge upside potential, you should check out the top 5 most popular stocks among hedge funds as many of these stocks already outperformed the market since 2019.

Is MLI A Good Investment Right Now?Is MLI A Good Stock To Buy?NYSE:MLISentiment Score Between 50 and 60Yahoo Finance