The government requires hedge funds and wealthy investors with a certain portfolio size to file a report that shows their equity positions at the end of every quarter. Even though it isn’t the intention, these filings level the playing field for ordinary investors. The latest round of 13F filings discloses the funds’ positions on June 30. We at Insider Monkey have made an extensive database of more than 700 of those elite funds and prominent investors’ filings. In this article, we analyze how these elite funds and prominent investors traded Tiffany & Co. (NYSE:TIF) based on those filings.

After a decline at the end of 2017, hedge funds have been jumping back into Tiffany with reckless abandon in 2018. Hedge fund ownership of the stock rose by 30% in the first-half of the year, which included new positions being opened in Q2 by the likes of George Soros’ Soros Fund Management (16,800 shares). Israel Englander’s Millennium Management (1.96 million shares) and Barry Rosenstein’s JANA Partners (1.76 million shares) were also major shareholders, pushing Tiffany into 18th spot among the 25 Stocks Billionaires Are Piling On. Tiffany has a big opportunity in China, where the luxury goods market expanded by 20% in 2017, compared to just 4% growth in Europe and 5% growth in the Americas. Status-conscious Chinese millennials are driving the increase in spending, with jewelry being among the leading growth categories. 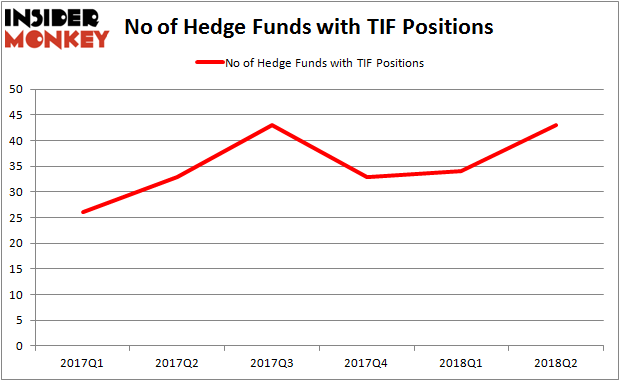 As you can see these stocks had an average of 29 hedge funds with bullish positions and the average amount invested in these stocks was $1.22 billion. That figure was $1.61 billion in TIF’s case. Mohawk Industries, Inc. (NYSE:MHK) is the most popular stock in this table. On the other hand CGI Group Inc. (USA) (NYSE:GIB) is the least popular one with only 11 bullish hedge fund positions. Tiffany & Co. (NYSE:TIF) is not the most popular stock in this group but hedge fund interest is still above average and rising fast. It’s also popular among the wealthiest smart money managers, who have decades of successful investing experience under their belts. In this regard, TIF might be a good candidate to consider a long position in.