With the third-quarter round of 13F filings behind us it is time to take a look at the stocks in which some of the best money managers in the world preferred to invest or sell heading into the fourth quarter. One of these stocks was Waste Management, Inc. (NYSE:WM).

Is Waste Management, Inc. (NYSE:WM) undervalued? Prominent investors are getting less optimistic. The number of long hedge fund positions fell by 2 recently. Our calculations also showed that wm isn’t among the 30 most popular stocks among hedge funds. 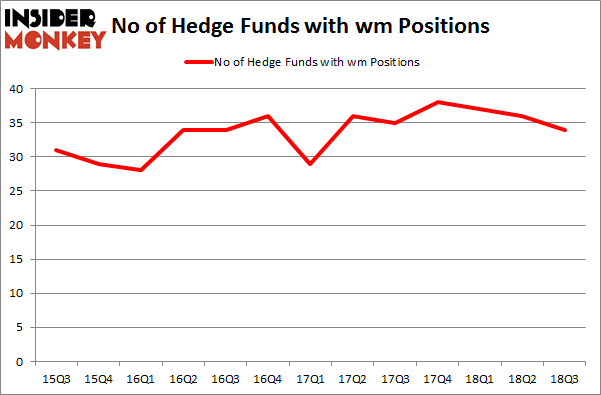 Due to the fact that Waste Management, Inc. (NYSE:WM) has witnessed a decline in interest from the aggregate hedge fund industry, it’s safe to say that there was a specific group of funds that elected to cut their entire stakes in the third quarter. At the top of the heap, Malcolm Fairbairn’s Ascend Capital sold off the largest stake of the 700 funds monitored by Insider Monkey, valued at close to $75.2 million in stock. John Brandmeyer’s fund, Cognios Capital, also sold off its stock, about $1.9 million worth. These moves are important to note, as aggregate hedge fund interest dropped by 2 funds in the third quarter.

As you can see these stocks had an average of 24.5 hedge funds with bullish positions and the average amount invested in these stocks was $1.63 billion. That figure was $3.43 billion in WM’s case. Applied Materials, Inc. (NASDAQ:AMAT) is the most popular stock in this table. On the other hand Barclays PLC (NYSE:BCS) is the least popular one with only 11 bullish hedge fund positions. Waste Management, Inc. (NYSE:WM) is not the most popular stock in this group but hedge fund interest is still above average. This is a slightly positive signal but we’d rather spend our time researching stocks that hedge funds are piling on. In this regard AMAT might be a better candidate to consider a long position.