Varonis Systems Inc (NASDAQ:VRNS) has seen a decrease in support from the world’s most elite money managers of late. VRNS was in 22 hedge funds’ portfolios at the end of the third quarter of 2018. There were 26 hedge funds in our database with VRNS positions at the end of the previous quarter. Our calculations also showed that vrns isn’t among the 30 most popular stocks among hedge funds.

What have hedge funds been doing with Varonis Systems Inc (NASDAQ:VRNS)?

At the end of the third quarter, a total of 22 of the hedge funds tracked by Insider Monkey held long positions in this stock, a change of -15% from one quarter earlier. On the other hand, there were a total of 22 hedge funds with a bullish position in VRNS at the beginning of this year. With the smart money’s positions undergoing their usual ebb and flow, there exists a select group of notable hedge fund managers who were adding to their holdings substantially (or already accumulated large positions). 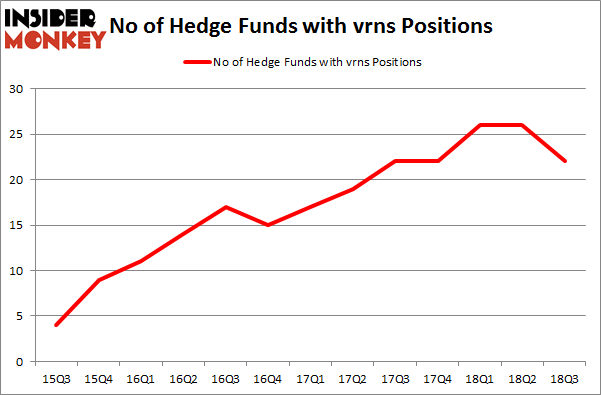 More specifically, Millennium Management was the largest shareholder of Varonis Systems Inc (NASDAQ:VRNS), with a stake worth $35.4 million reported as of the end of September. Trailing Millennium Management was Two Sigma Advisors, which amassed a stake valued at $19.8 million. Arrowstreet Capital, DSAM Partners, and Point72 Asset Management were also very fond of the stock, giving the stock large weights in their portfolios.

Due to the fact that Varonis Systems Inc (NASDAQ:VRNS) has experienced bearish sentiment from the entirety of the hedge funds we track, we can see that there was a specific group of funds who were dropping their positions entirely by the end of the third quarter. At the top of the heap, Principal Global Investors’s Columbus Circle Investors dropped the biggest stake of the 700 funds watched by Insider Monkey, valued at an estimated $11.2 million in stock. Spencer M. Waxman’s fund, Shannon River Fund Management, also sold off its stock, about $4.4 million worth. These moves are interesting, as total hedge fund interest dropped by 4 funds by the end of the third quarter.

As you can see these stocks had an average of 19.75 hedge funds with bullish positions and the average amount invested in these stocks was $177 million. That figure was $153 million in VRNS’s case. Medpace Holdings, Inc. (NASDAQ:MEDP) is the most popular stock in this table. On the other hand ABM Industries, Inc. (NYSE:ABM) is the least popular one with only 11 bullish hedge fund positions. Varonis Systems Inc (NASDAQ:VRNS) is not the most popular stock in this group but hedge fund interest is still above average. This is a slightly positive signal but we’d rather spend our time researching stocks that hedge funds are piling on. In this regard MEDP might be a better candidate to consider a long position.

Cloudera, Inc. (CLDR): Are Hedge Funds Right About This Stock?
Monthly Newsletter Strategy
Download a free copy of our newsletter and see the details inside!
Hedge Fund Resource Center
Related News
Is Varonis Systems Inc (VRNS) Worthy of Your Portfolio? Five Reasons You Need a Day-Trading Mentor 15 Most Important Medical Discoveries of 2018 The 10 Best Islands to Visit in 2019
Billionaire Hedge Funds