The fourth quarter was a rough one for most investors, as fears of a rising interest rate environment in the U.S, a trade war with China, and a more or less stagnant Europe, weighed heavily on the minds of investors. Both the S&P 500 and Russell 2000 sank as a result, with the Russell 2000, which is composed of smaller companies, being hit especially hard. This was primarily due to hedge funds, which are big supporters of small-cap stocks, pulling some of their capital out of the volatile markets during this time. Let’s look at how this market volatility affected the sentiment of hedge funds towards Tanger Factory Outlet Centers Inc. (NYSE:SKT), and what that likely means for the prospects of the company and its stock.

Is Tanger Factory Outlet Centers Inc. (NYSE:SKT) a worthy investment now? The smart money is becoming less hopeful. The number of long hedge fund positions fell by 2 lately. Our calculations also showed that SKT isn’t among the 30 most popular stocks among hedge funds.

Heading into the fourth quarter of 2018, a total of 11 of the hedge funds tracked by Insider Monkey were long this stock, a change of -15% from the previous quarter. On the other hand, there were a total of 11 hedge funds with a bullish position in SKT at the beginning of this year. With hedgies’ positions undergoing their usual ebb and flow, there exists a select group of noteworthy hedge fund managers who were adding to their stakes significantly (or already accumulated large positions). 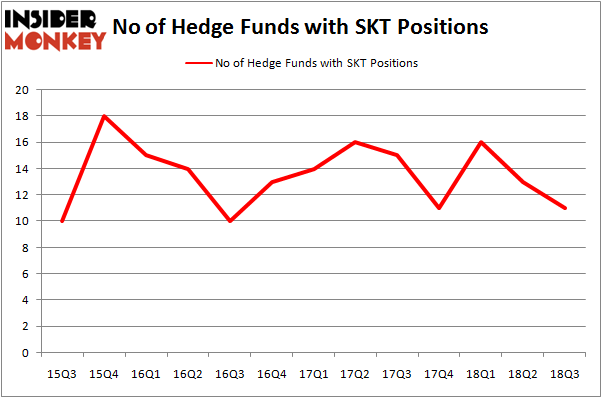 More specifically, Millennium Management was the largest shareholder of Tanger Factory Outlet Centers Inc. (NYSE:SKT), with a stake worth $25 million reported as of the end of September. Trailing Millennium Management was Echo Street Capital Management, which amassed a stake valued at $16.7 million. Diamond Hill Capital, Two Sigma Advisors, and Citadel Investment Group were also very fond of the stock, giving the stock large weights in their portfolios.

Since Tanger Factory Outlet Centers Inc. (NYSE:SKT) has experienced bearish sentiment from the aggregate hedge fund industry, logic holds that there lies a certain “tier” of hedge funds that slashed their positions entirely by the end of the third quarter. It’s worth mentioning that Jeffrey Furber’s AEW Capital Management dumped the largest investment of the 700 funds watched by Insider Monkey, totaling an estimated $35.9 million in stock, and J. Alan Reid, Jr.’s Forward Management was right behind this move, as the fund said goodbye to about $0.5 million worth. These moves are interesting, as aggregate hedge fund interest dropped by 2 funds by the end of the third quarter.

As you can see these stocks had an average of 22.5 hedge funds with bullish positions and the average amount invested in these stocks was $216 million. That figure was $71 million in SKT’s case. Groupon Inc (NASDAQ:GRPN) is the most popular stock in this table. On the other hand Argo Group International Holdings, Ltd. (NYSE:ARGO) is the least popular one with only 13 bullish hedge fund positions. Compared to these stocks Tanger Factory Outlet Centers Inc. (NYSE:SKT) is even less popular than ARGO. Considering that hedge funds aren’t fond of this stock in relation to other companies analyzed in this article, it may be a good idea to analyze it in detail and understand why the smart money isn’t behind this stock. This isn’t necessarily bad news. Although it is possible that hedge funds may think the stock is overpriced and view the stock as a short candidate, they may not be very familiar with the bullish thesis. In either case more research is warranted.