Is Royal Dutch Shell plc (RDS) A Good Stock To Buy According To Hedge Funds?

The 700+ hedge funds and money managers tracked by Insider Monkey have already compiled and submitted their 13F filings for the second quarter, which unveil their equity positions as of September 30. We went through these filings, fixed typos and other more significant errors and identified the changes in hedge fund positions. Our extensive review of these public filings is finally over, so this article is set to reveal the smart money sentiment towards Royal Dutch Shell plc (NYSE:RDS).

Royal Dutch Shell plc (NYSE:RDS) shareholders have witnessed a decrease in enthusiasm from smart money of late. Our calculations also showed that RDS isn’t among the 30 most popular stocks among hedge funds.

In the eyes of most shareholders, hedge funds are viewed as slow, outdated investment vehicles of yesteryear. While there are over 8,000 funds trading today, We look at the aristocrats of this group, approximately 700 funds. These investment experts manage most of all hedge funds’ total asset base, and by tailing their matchless equity investments, Insider Monkey has deciphered a number of investment strategies that have historically outrun Mr. Market. Insider Monkey’s flagship hedge fund strategy outrun the S&P 500 index by 6 percentage points per annum since its inception in May 2014 through early November 2018. We were able to generate large returns even by identifying short candidates. Our portfolio of short stocks lost 24% since February 2017 (through December 3rd) even though the market was up nearly 23% during the same period. We just shared a list of 11 short targets in our latest quarterly update.

What does the smart money think about Royal Dutch Shell plc (NYSE:RDS)? 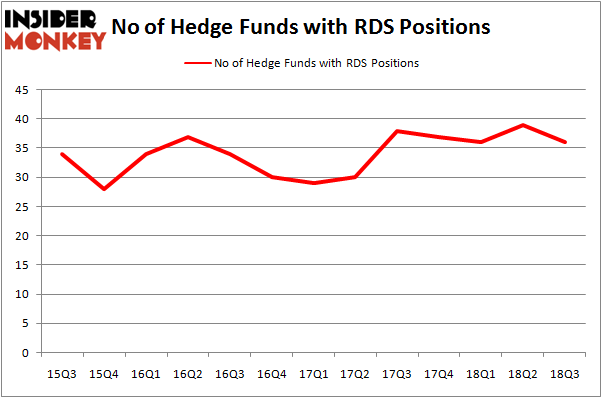 Due to the fact that Royal Dutch Shell plc (NYSE:RDS) has faced a decline in interest from hedge fund managers, it’s easy to see that there were a few hedge funds that elected to cut their positions entirely last quarter. Intriguingly, Robert Pohly’s Samlyn Capital sold off the biggest stake of the 700 funds followed by Insider Monkey, comprising about $69.8 million in stock. Jorge Paulo Lemann’s fund, 3G Capital, also said goodbye to its stock, about $34.6 million worth. These transactions are important to note, as total hedge fund interest dropped by 3 funds last quarter.

As you can see these stocks had an average of 72.75 hedge funds with bullish positions and the average amount invested in these stocks was $11.87 billion. That figure was $2.48 billion in RDS’s case. Bank of America Corporation (NYSE:BAC) is the most popular stock in this table. On the other hand Pfizer Inc. (NYSE:PFE) is the least popular one with only 58 bullish hedge fund positions. Compared to these stocks Royal Dutch Shell plc (NYSE:RDS) is even less popular than PFE. Considering that hedge funds aren’t fond of this stock in relation to other companies analyzed in this article, it may be a good idea to analyze it in detail and understand why the smart money isn’t behind this stock. This isn’t necessarily bad news. Although it is possible that hedge funds may think the stock is overpriced and view the stock as a short candidate, they may not be very familiar with the bullish thesis. In either case more research is warranted.