Q2 Holdings Inc (NYSE:QTWO) was in 13 hedge funds’ portfolios at the end of September. QTWO has experienced a decrease in activity from the world’s largest hedge funds in recent months. There were 16 hedge funds in our database with QTWO holdings at the end of the previous quarter. Our calculations also showed that qtwo isn’t among the 30 most popular stocks among hedge funds.

What have hedge funds been doing with Q2 Holdings Inc (NYSE:QTWO)?

At the end of the third quarter, a total of 13 of the hedge funds tracked by Insider Monkey were long this stock, a change of -19% from one quarter earlier. The graph below displays the number of hedge funds with bullish position in QTWO over the last 13 quarters. With hedge funds’ capital changing hands, there exists a select group of noteworthy hedge fund managers who were increasing their holdings substantially (or already accumulated large positions). 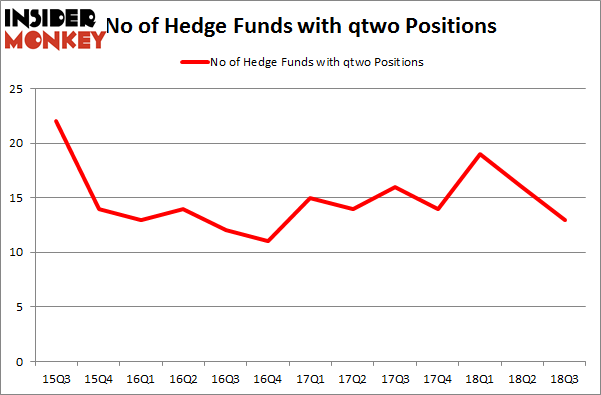 Among these funds, Columbus Circle Investors held the most valuable stake in Q2 Holdings Inc (NYSE:QTWO), which was worth $18.3 million at the end of the third quarter. On the second spot was Renaissance Technologies which amassed $10.3 million worth of shares. Moreover, Driehaus Capital, Citadel Investment Group, and Millennium Management were also bullish on Q2 Holdings Inc (NYSE:QTWO), allocating a large percentage of their portfolios to this stock.

Because Q2 Holdings Inc (NYSE:QTWO) has faced a decline in interest from the entirety of the hedge funds we track, logic holds that there was a specific group of money managers who were dropping their full holdings in the third quarter. Interestingly, Brad Farber’s Atika Capital cut the largest investment of the 700 funds monitored by Insider Monkey, valued at about $2.4 million in stock. Chuck Royce’s fund, Royce & Associates, also dropped its stock, about $0.9 million worth. These bearish behaviors are important to note, as aggregate hedge fund interest was cut by 3 funds in the third quarter.

As you can see these stocks had an average of 9.75 hedge funds with bullish positions and the average amount invested in these stocks was $190 million. That figure was $54 million in QTWO’s case. JELD-WEN Holding, Inc. (NYSE:JELD) is the most popular stock in this table. On the other hand Nuveen Quality Municipal Income Fund (NYSE:NAD) is the least popular one with only 4 bullish hedge fund positions. Q2 Holdings Inc (NYSE:QTWO) is not the most popular stock in this group but hedge fund interest is still above average. This is a slightly positive signal but we’d rather spend our time researching stocks that hedge funds are piling on. In this regard JELD might be a better candidate to consider a long position.