Owens & Minor, Inc. (NYSE:OMI) was in 11 hedge funds’ portfolios at the end of the third quarter of 2018. OMI investors should be aware of a decrease in enthusiasm from smart money recently. There were 13 hedge funds in our database with OMI positions at the end of the previous quarter. Our calculations also showed that omi isn’t among the 30 most popular stocks among hedge funds.

At the moment there are a large number of methods market participants use to evaluate publicly traded companies. A duo of the less known methods are hedge fund and insider trading activity. Our researchers have shown that, historically, those who follow the top picks of the best hedge fund managers can outpace the S&P 500 by a superb margin (see the details here).

What have hedge funds been doing with Owens & Minor, Inc. (NYSE:OMI)?

At the end of the third quarter, a total of 11 of the hedge funds tracked by Insider Monkey were bullish on this stock, a change of -15% from the second quarter of 2018. Below, you can check out the change in hedge fund sentiment towards OMI over the last 13 quarters. So, let’s see which hedge funds were among the top holders of the stock and which hedge funds were making big moves. 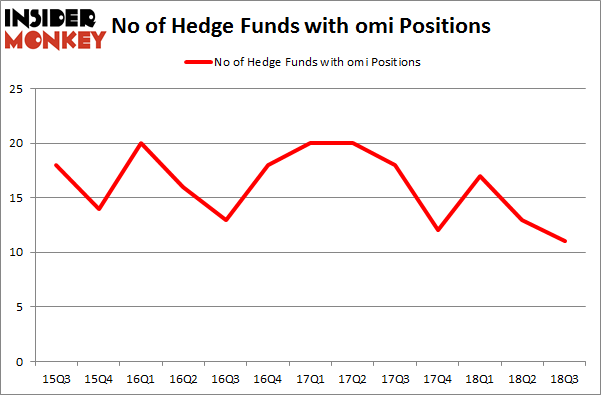 More specifically, Royce & Associates was the largest shareholder of Owens & Minor, Inc. (NYSE:OMI), with a stake worth $13.5 million reported as of the end of September. Trailing Royce & Associates was Two Sigma Advisors, which amassed a stake valued at $8.7 million. Citadel Investment Group, D E Shaw, and GAMCO Investors were also very fond of the stock, giving the stock large weights in their portfolios.

Because Owens & Minor, Inc. (NYSE:OMI) has experienced a decline in interest from the smart money, we can see that there were a few money managers that decided to sell off their full holdings by the end of the third quarter. It’s worth mentioning that Israel Englander’s Millennium Management dropped the largest position of all the hedgies watched by Insider Monkey, totaling close to $1.3 million in stock. Michael Castor’s fund, Sio Capital, also sold off its stock, about $1.3 million worth. These bearish behaviors are intriguing to say the least, as total hedge fund interest fell by 2 funds by the end of the third quarter.

As you can see these stocks had an average of 11.25 hedge funds with bullish positions and the average amount invested in these stocks was $171 million. That figure was $42 million in OMI’s case. Vista Outdoor Inc (NYSE:VSTO) is the most popular stock in this table. On the other hand ClearBridge Energy MLP Fund Inc. (NYSE:CEM) is the least popular one with only 1 bullish hedge fund positions. Owens & Minor, Inc. (NYSE:OMI) is not the least popular stock in this group but hedge fund interest is still below average. This is a slightly negative signal and we’d rather spend our time researching stocks that hedge funds are piling on. In this regard VSTO might be a better candidate to consider a long position.