Looking for stocks with high upside potential? Just follow the big players within the hedge fund industry. Why should you do so? Let’s take a brief look at what statistics have to say about hedge funds’ stock picking abilities to illustrate. The Standard and Poor’s 500 Index returned approximately 12.1% in 2019 (through May 30th). Conversely, hedge funds’ 20 preferred S&P 500 stocks generated a return of 18.7% during the same period, with the majority of these stock picks outperforming the broader market benchmark. Coincidence? It might happen to be so, but it is unlikely. Our research covering the last 18 years indicates that hedge funds’ stock picks generate superior risk-adjusted returns. That’s why we believe it is wise to check hedge fund activity before you invest your time or your savings on a stock like NRG Energy Inc (NYSE:NRG).

Is NRG Energy Inc (NYSE:NRG) worth your attention right now? Investors who are in the know are in a bearish mood. The number of bullish hedge fund bets retreated by 9 recently. Our calculations also showed that nrg isn’t among the 30 most popular stocks among hedge funds. 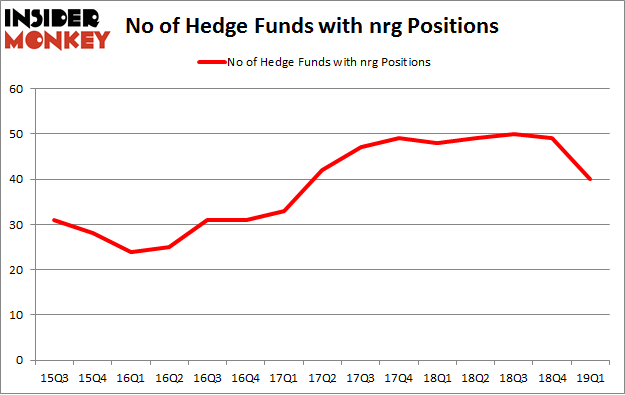 According to publicly available hedge fund and institutional investor holdings data compiled by Insider Monkey, Brahman Capital, managed by Mitch Kuflik and Rob Sobel, holds the biggest position in NRG Energy Inc (NYSE:NRG). Brahman Capital has a $270.9 million position in the stock, comprising 19.2% of its 13F portfolio. Sitting at the No. 2 spot is Robert Pitts of Steadfast Capital Management, with a $217.8 million position; the fund has 3.4% of its 13F portfolio invested in the stock. Remaining members of the smart money that are bullish contain Jim Simons’s Renaissance Technologies, John Overdeck and David Siegel’s Two Sigma Advisors and Cliff Asness’s AQR Capital Management.

Seeing as NRG Energy Inc (NYSE:NRG) has experienced bearish sentiment from hedge fund managers, it’s easy to see that there exists a select few hedgies who sold off their entire stakes by the end of the third quarter. Intriguingly, Richard Barrera’s Roystone Capital Partners said goodbye to the largest position of the 700 funds tracked by Insider Monkey, worth an estimated $63.2 million in stock, and Don Morgan’s Brigade Capital was right behind this move, as the fund dropped about $24 million worth. These bearish behaviors are important to note, as aggregate hedge fund interest fell by 9 funds by the end of the third quarter.